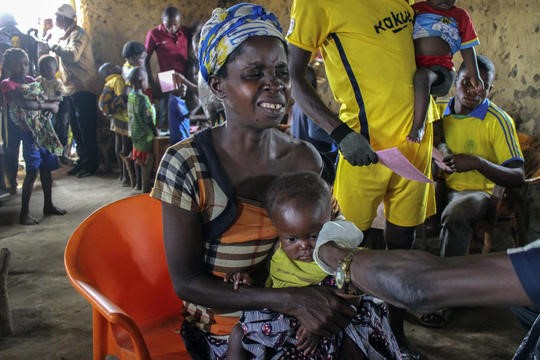 
The measles outbreak in the Democratic Republic of the Congo (DRC) is the largest in the world and continues to trend and spread geographically.

Cases have been reported from more than 90 percent health zones across all 26 provinces in the country.

The capital city of Kinshasa has seen more than 5,600 cases.

Health officials have seen two peaks of measles this year with the most recent being several weeks ago.

WHO says the massive resurgence of measles in Democratic Republic of the Congo is likely due to an accumulation of measles-susceptible children which were not vaccinated against the virus due to suboptimal routine immunization coverage and inadequate implementation of supplementary immunization activities (SIA).

Furthermore, the under-performance of case-based surveillance has impaired rapid detection of suspected measles cases, which is necessary to guide timely and effective outbreak response interventions.

This measles outbreak is dramatic. A pryer for them! Source

Mars Once Had So Much Water, It Could Have Been An Ocean World, Scientists Say : ScienceAlert
Scientists Revived Ancient ‘Zombie Viruses’ Frozen For Eons in Siberia : ScienceAlert
Octopus Brains Evolved to Share a Surprising Trait in With Our Brains : ScienceAlert
10 Days After Its Launch, Orion Has Successfully Entered Lunar Orbit : ScienceAlert
Alzheimer’s Gene Doesn’t Guarantee Dementia. Here’s What You Can Do to Reduce Risk : ScienceAlert