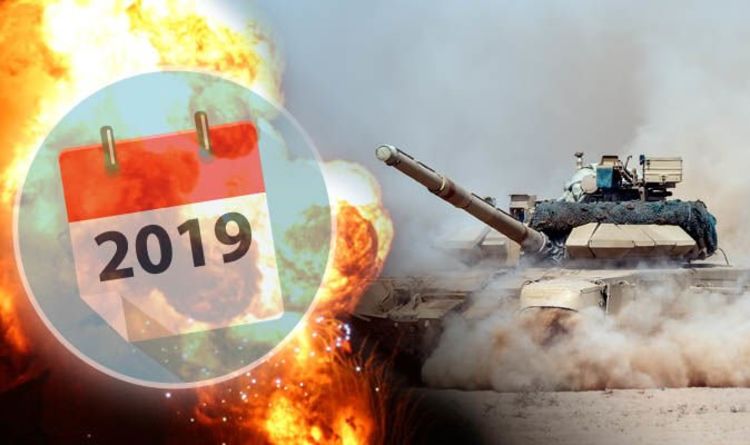 The New Year will be the most tumultuous one yet if the various prophecies made by mystics and prophets over the last 500 years come to pass. From Nostradamus to Baba Vanga, conspiracy theorists and doomsday preachers believe some form of cataclysm is bound to happen in the near future. Even modern psychics who rely on their prophetic visions or divinate from vegetables are certain 2019 will go down in the history books. With just nine hours to go before the UK welcomes the New Year, here are some of the most shocking and bizarre predictions made for 2019.

Vladimir Putin will survive an assassination attempt in 2019 – Baba Vanga

According to Bulgarian mystic Baba Vanga, the so-called Balkan Nostradamus, Russian President Vladimir Putin will come under attack from someone within his own ranks.

The Russian leader who claims to have already survived at least four attempts on his life in the past is currently under the protection of an elite sniper unit.

But if Baba Vanga’s prophecy comes to pass, Mr Putin will have to suffer the betrayal of someone very close to him.

Charlotte Dobre of the InformationOverload YouTube channel said: “In the coming year, she said that there will be an assassination attempt on Vladimir Putin by a member of his own security team and Europe will experience an economic collapse.”

2019 predictions: Conspiracists believe a World War 3 could break out in 2019 (Image: GETTY)

The outbreak of World War 3 – Nostradamus

The French apothecary, writer and supposed clairvoyant is believed to have correctly warned the world of the rise of Adolf Hitler to power as early as 1555.

Nostradamus’ followers purport the French mystic had powers of divination which allowed him to foretell the future in cryptic passages know as quatrains.

One of these quatrains is said to predict the outbreak of a global conflict which will ravage the world for 27 years.

Nostradamus wrote: “Twice put up and twice cast down, the East will also weaken the West. Its adversary after several battles chased by sea will fail at time of need.

“The great man will be struck down in the day by a thunderbolt. An evil deed, foretold by the bearer of a petition.”

A US recession will have a global impact – Jemima Packington

Jemima Packington, who claims to be the world’s leading Asparamancer, believes economic crisis will hit the US next year.

As an Asparamancer, Ms Packington claims to see the future in spears of asparagus tossed into the air.

The Asparamancer claimed the trade war between the US and China will peacefully resolve next year, Big Brother will return to TV and England’s rugby and cricket teams will enjoy success.

2019 predictions: Nostradamus is believed to have warned the world of conflict (Image: GETTY)

2019 predictions: A psychic has claimed Vladimir Putin will fall ill in the next year (Image: GETTY)

Psychic and medium Craig Hamilton-Parker claims to have had a vision of US President Donald Trump falling gravely ill in 2019.

Mr Hamilton-Parker said: “I feel, talking of Donald Trump, that he will be taken ill during 2019 but I don’t think this will be a major, serious thing that will take him out of his presidency or anything like that.

“I don’t think it’s life-threatening but it’s maybe something like a perforated bowel came to mind? Something like that.

“Something quite serious but not going to kill you. He may be unable to do the job for a short period of time.”

Prominent Christian preacher and doomsday prophet Paul Begley is certain an upcoming Blood Moon lunar eclipse in January 2019 was foretold by the Bible.

The evangelical preacher from West Lafayette, Indiana, said: “I’m not saying on January 22 all hell’s going to break loose, right after the Blood Moon, and then again I’m not saying it won’t.

“I truly believe America is going to face some type of disaster and that this Super Blood Moon is a serious harbinger of these last days.”

Catastrophic Trigger That Led to Earth’s Largest Mass Extinction Revealed in Fossils
Your Dreams Are More Complex Depending on What Stage of Sleep You’re In, Study Finds
24-Million-Year-Old Nursery For Baby Megasharks Discovered in South Carolina
Naked Mole Rats Have Been Caught Kidnapping Other Mole Rat Babies, And It Gets Creepier
You’ve Heard of Vantablack. Scientists Just Created ‘Super White’, And It’s Very Cool