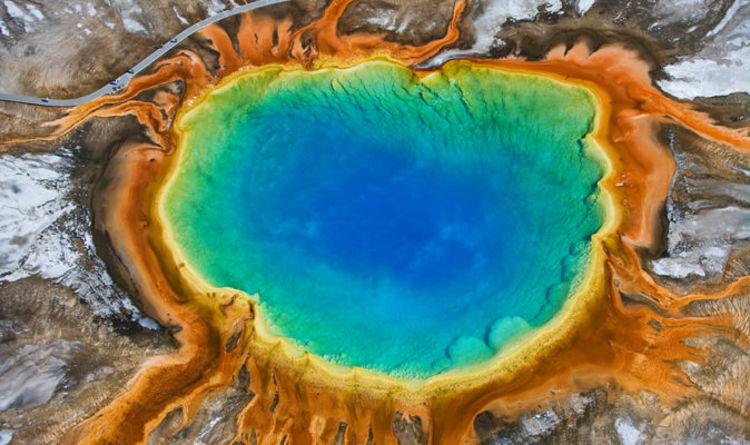 
The supervolcano in Wyoming, USA, is one of the most feared volcanos in the world which packs an eruption which could potentially end civilisation.

An eruption on the scale occurs roughly every one million years or so, but experts warn of a more common experience for the supervolcano.

Scientists claim that hydrothermal eruptions – when boiling fluids interconnect with gas beneath the surface – take place with much more regularity.

A hydrothermal blast “large enough to create a 328-ft-wide crater might be expected every few hundred years.”

An eruption on this scale would fling debris up to two kilometres into the air and put those nearby at risk.

“Hydrothermal explosions are violent and dramatic events resulting in the rapid ejection of boiling water, steam, mud, and rock fragments.

“The explosions can reach heights of 2 km [1.2 miles] and leave craters that are from a few metres (tens of feet) up to more than 2 km in diameter.

“Ejected material, mostly breccia—angular rocks cemented by clay—can be found as far as 3 to 4 km from the largest craters.”

“Although large hydrothermal explosions are rare events on a human timescale, the potential for additional future events of the sort in Yellowstone National Park is not insignificant.

“Based on the occurrence of large hydrothermal explosion events over the past 16,000 years, an explosion large enough to create a 328-ft-wide crater might be expected every few hundred years.”

Lewis Dartnell, a professor of astrobiology at the University of Westminster, recently said a full eruption from Yellowstone could end humanity.

Prof Dartnell told an audience at New Scientist Life in London today: “Yellowstone will erupt in what we call a supervolcano eruption as it has done in the past and it will put an end to human civilisation.”

If Yellowstone were to erupt, it will kill an estimated 87,000 people in the States immediately.