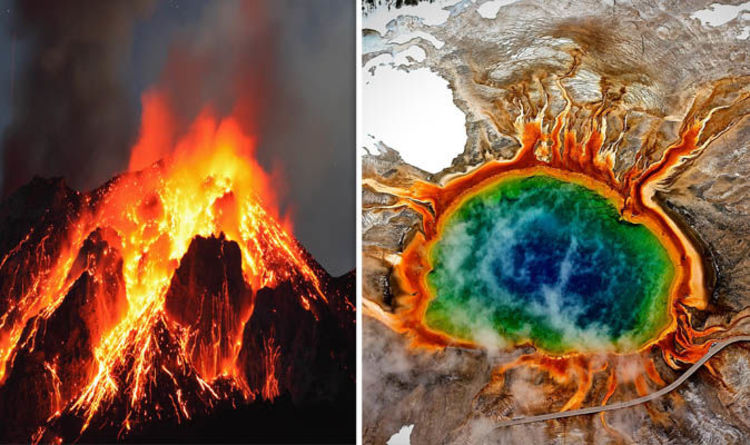 
Yellowstone experts at Washington State University (WSU) and the University of Idaho have suggested scientists have so far underestimated how much heat Yellowstone is generating.

The startling claims come after the volcanologists examined a pool of basalt magma recharging the complex supervolcano.

According to Jerry Fairly, a geologist at the University of Idaho, the cache of molten rock below Yellowstone is the primary source for fuel for the National park’s hundreds of hot springs and geysers.

The Yellowstone volcano expert said: “All the heat that drives all the famous hot springs and geysers, ultimately all of that orientates in the mantle.”

Fellow geologist Peter Larson, WSU, added: “It is the coal in the furnace that is heating things up. It’s heating up the boiler.

“The boiler is what explodes. This tells us what is heating up the boiler.”

The scientists then measured the amount of time it took the compound to surface and the temperature of the hot springs to calculate just how much water and heat was escaping out of the springs.

The researchers found previous studies underestimated the amount of water running through Yellowstone’s underground plumbing and how much heat was being leaked by the springs.

The data also allowed the scientists to estimate how much molten magma was seeping into the supervolcano from the Earth’s mantle.

Dr Larson said: “What our work did is really show that there’s a lot of heat unaccounted for if you just measure the hot water coming out.”

The expert further stressed the research gives Yellowstone experts a better idea of how to monitor the supervolcano.

But unfortunately, the findings will not help geologists predict future Yellowstone eruptions.

The last Yellowstone supervolcano eruption went off an estimated 640,000 years ago and some fear Yellowstone is overdue another blast.

The supervolcano is known to have produced one of the greatest eruptions in history, covering the ancient US in 2,000 times more ash than the Mount St Helens eruption of 1980.

But according to the United States Geological Survey’s (USGS) Yellowstone Volcano Observatory (YVO) fears of an overdue eruption are unjust and we could still be 90,000 years away from another Yellowstone cataclysm.

Yellowstone is believed to have erupted on three separate occasions in the past and the time frame between each eruption averages more than 730,000 years.

“Again, the last eruption was 0.64 million years ago, implying that we are still about 90,000 years away from the time when we might consider calling Yellowstone overdue for another caldera- forming eruption.

“Nevertheless, we cannot discount the possibility of another such eruption occurring some time in the future, given Yellowstone’s volcanic history and the continued presence of magma beneath the Yellowstone caldera.”

Do You Need to Drink Eight Glasses of Water a Day? It’s Complicated : ScienceAlert
Alzheimer’s Gene Doesn’t Guarantee Dementia. Here’s What You Can Do to Reduce Risk : ScienceAlert
Mummies With Golden Tongues Discovered in Ancient Egyptian Necropolis : ScienceAlert
The FDA Just Approved The Most Expensive Drug in The World : ScienceAlert
Two Black Holes Met by Chance, And It Created Something Never Seen Before : ScienceAlert