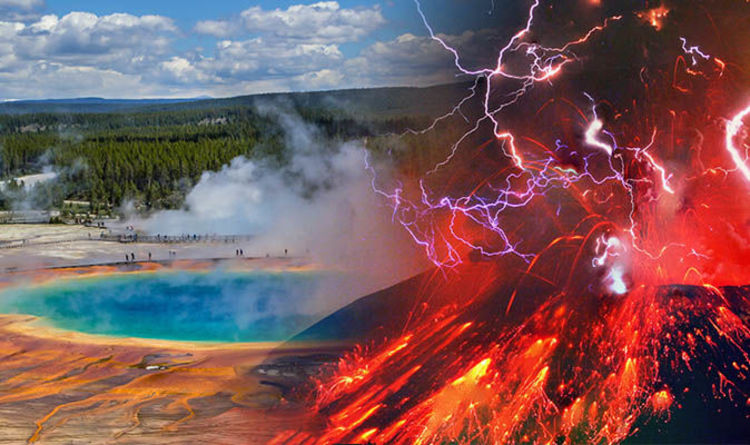 Yellowstone is one of the biggest super volcanoes rumbling away on the planet and though it typically remains quiet, every one million years or so the volcano rears its ugly head.

The three most recent Yellowstone eruptions occurred two million, 1.3 million and 630,000 years ago – many are now worried another fiery blast is overdue.

Thankfully according to Professor Ilya Bindeman, associate professor of geological sciences at the University of Oregon, another eruption is not expected for another one or two million years.

But the dangers associated with Yellowstone are still incredibly grave and could potentially affect the entire globe.

David Rothery, a professor of Planetary Geosciences at the Open University, warned Yellowstone erupting would lead to a “nuclear winter” of volcanic ash choking out the sun from the skies.

Smaller volcanic eruptions are known to have an impact on local weather patterns and temperatures, and super volcano eruptions only magnify this problem.

And though there is no immediate indication the Yellowstone Caldera is ready to pop any time soon, scientists have warned us in advance to prepare for the worst.

In September 2014, a team of scientists published a paper in Geochemistry, Geophysics, Geosystems outlining the apocalyptic effects of a Yellowstone eruption.

Perhaps the most terrifying finding in the paper was Yellowstone’s capability to immediately bury the states of Wyoming, Idaho, Montana and Colorado beneath an ocean of deadly volcanic ash.

The amounts of spewed ash would be enough to wipe out plant life, kill helpless animals and even crush rooftops.

The study warned: “Ash fall thicknesses of centimetres throughout the American Midwest would disrupt live-stock and crop production, especially during critical times in the growing season.

“This deposits could threaten building integrity and obstruct sewer and water lines.

“Electronic communications and air transportation would likely be shutdown throughout North America.”


Elsewhere where the ash fallout would be less dense, only a few millimetres or so, cars would loose traction on the roads, electric transformers would short out and breathing problems. would be exacerbated.

But Yellowstone’s eruption would still be felt far out with “major climate effects” potentially witnessed throughout the globe.

According to the study, similar super volcano eruptions in the past have been known to drop global temperatures by as much as 1ºC for several years. 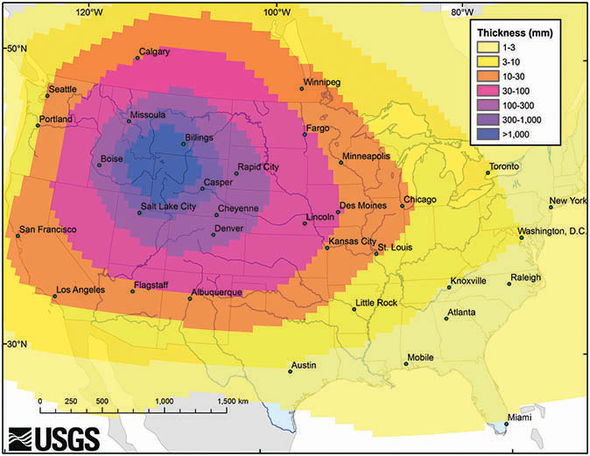 In fact the infamous eruption of super volcano Tambora in 1815 led to a year “without summer” when snowfall blanketed the US in June and crop failure led to a devastating widespread famine.

The study added: “Other indirect effects include wind reworking of tephra into migrating dunes that bury roads and structures; or increased sediment load to streams that exacerbates flooding and impedes river traffic.”

Volcanologists observing Yellowstone activity have however underlined this to be the ‘worst-case scenario’.

Study co-author, Jacob Lowenstern of the US Geological Survey (USGS) noted his research was not a concrete prediction of the future. 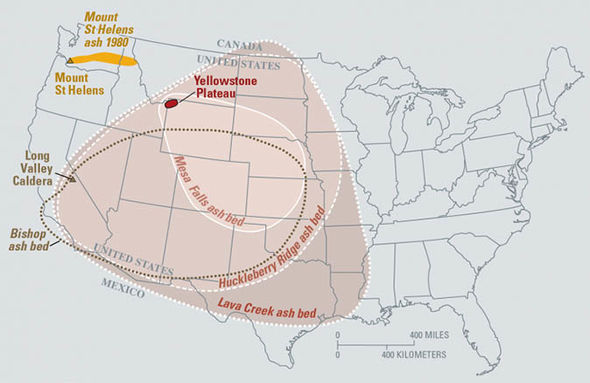 Yellowstone eruption: The emission from the super volcano could impact global climates

He said: “Even if Yellowstone did erupt again, you probably wouldn’t get that worst-case scenario.

“What’s much, much more common are small eruptions — that’s a point that often gets ignored in the press.”

More recently meteorologists have explained how mega eruptions can impact global weather patterns by choking out the skies with thick ash.

He said: “Large volcanic eruption columns can inject ash particles and sulfur-rich gases into the troposphere and stratosphere and these clouds can circle the globe within weeks of the volcanic activity.”

The heavy concentrations of particles in turn decrease the amount of sunlight reaching Earth which could cool global temperatures.

She said: “There is a risk it could be hazardous to aircraft, but those effects are not as well known yet. 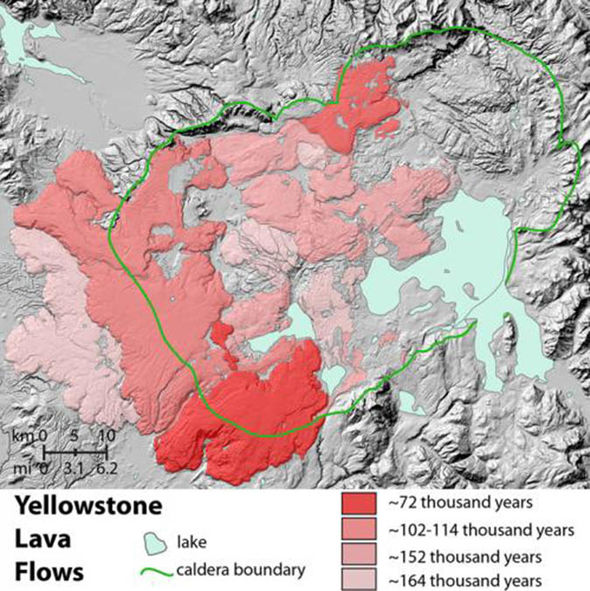 Yellowstone eruption: The lava flows from the super volcano would be less worrying than the ash

“There are two possible effects. Firstly, the sulphur dioxide through activation with water in the atmosphere could speed up the erosion of certain parts of the aircraft.

“Volcanic ash is still the most dangerous because it can stop an airplanes engine.

“Secondly it could affect the quality of the air for the passengers inside the plane’s cabin.”

All in all considered the odds of Yellowstone erupting any time soon are pretty low.

The USGS is certain the “odds are very high that Yellowstone will be eruption-free for the coming centuries.”

Volcanic eruptions are inevitable at some point the agency said, but for now we are most likely to just witness “moderate earthquakes and hydrothermal explosions”.