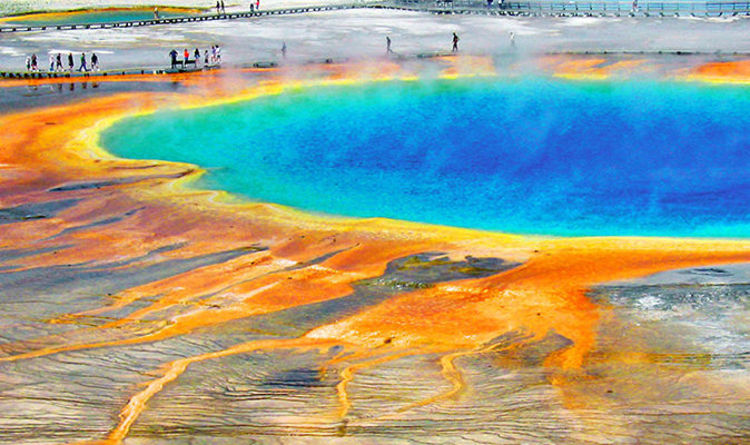 
Yellowstone, mostly located in Wyoming state in America, is fed by a massive magma chamber which can contain enough power to cause a catastrophic eruption.

It could also be a new energy source according to a 2017 thought experiment by NASA scientists, but experts oppose the move, which they say would damage the local area.

Peter Larson, a geologist at Washington State University, said: “It’s a national park and to me, it’s sacred.

“So, no you’re not going to drill there.”

Even the leader of the NASA thought experiment, Brian Wilcox, is opposed to acting on his team’s findings.

Mr Wilcox, an engineer NASA’s Jet Propulsion Laboratory said: “I’ve been to Yellowstone many times myself – I love it.

“I certainly would like to see my grandchildren have the same experience that I had. So, I’m not in favour of doing anything to threaten those features.”

If the volcano explodes it could expel 1000 cubic-kilometres of rock, blanket the United States in debris, and plunge Earth into a volcanic winter.

Although an eruption is unlikely, the NASA study was exploring ways to prevent this apocalyptic explosion.

Researchers concluded that by drilling wells around the volcano and pumping cold water into the lava they could cool the Yellowstone magma and generate geothermal energy.

Currently the 1970 Geothermal Steam Act prohibits placement of geothermal plants in national parks, and even lists Yellowstone by name.

The NASA team proposed using a new technique for harnessing energy from volcanos, which involves drilling tens of thousands of feet down to hot bedrock, which could leave surface features untouched.

But the idea has reached a standstill amid concerns of pushback from local communities concerned about the environment and even protecting local gods.

There’s Trouble Bubbling Up in Newly Formed Alaskan Lakes, And Scientists Are Worried : ScienceAlert
Wolves Really Can Become Attached to Humans Like Dogs Can, Adorable Study Finds : ScienceAlert
We Have Our First Look at Neptune’s Rings in 33 Years, And They’re Glorious : ScienceAlert
One of The World’s Largest Organisms Is Disintegrating. Here’s How We Might Save It. : ScienceAlert
Scientists Don’t Know What to Do With This Weird ‘Blue Goo’ Ocean Organism : ScienceAlert