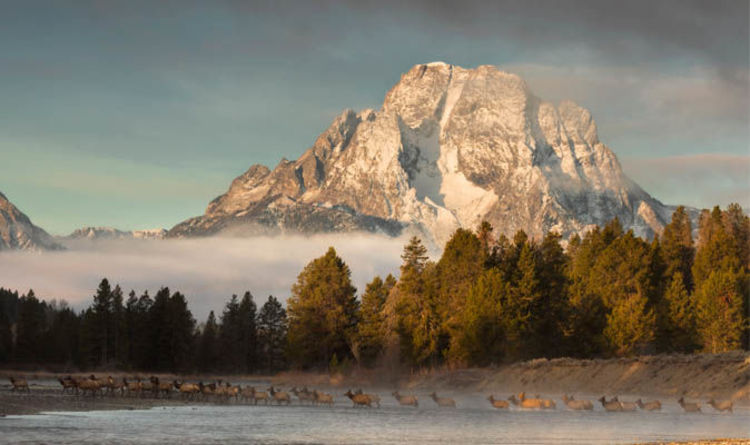 
Yellowstone scientists warned the National Park and supervolcano complex could be struck by a catastrophic earthquake in the future.

Yellowstone Volcano Observatory (YVO) scientist Michael Poland said while the supervolcano could erupt again one day, earthquakes are a much more immediate danger.

Speaking to USA Today, the Yellowstone scientist said: “The biggest concern we have for Yellowstone is not with the volcano, it’s with earthquakes.

“This is an under appreciated hazard in the Yellowstone area. There can and will be in the future magnitude 7 earthquakes.”

The powerful tremors killed 28 people after triggering a landslide next to one of the park’s campsites.

The earthquake dislodged some 80 million tonnes of rock and blocked off a river, creating today’s Hebgen Earthquake Lake in Sothwestern Montana.

On average, anywhere between 1,500 and 2,500 earthquakes rock the Yellowstone complex every year but most go unnoticed.

The 1959 earthquake remains one of the most powerful to occur in the continental United States, to date.

Dr Poland said the odds of another such earthquake happening are more likely than a Yellowstone volcano eruption.

The geophysicist said: “That’s something that happens on a human life scale.

“We can say they are likely to occur, but we can’t say when.”

Jamie Farrell, a geology professor at the University of Utah, warned a magnitude 7 quake today could be much more devastating than the one 60 years ago.

The number of daily visitors to Yellowstone are much higher these days, having first exceeded three million annual visitors in 1992.

A new record of more than four million visitors was set in 2015 and the park can accommodate up to 14,300 overnight visitors in the peak summertime.

Professor Farell said: “It would be a lot worse today with more people in the area.”

The Yellowstone volcano caldera in Wyoming is one of the biggest and most well known supervolcanoes on the globe.

The mega volcano last erupted around 630,000 to 700,000 years ago and eruptions occur on a one million year or so cycle.

Scientists fear up to 87,000 people would be immediately killed by a Yellowstone blast if the supervolcano ever goes off – although there is thought to be a very slim chance of this ever happening again.

The ash fallout from Yellowstone erupting alone has the potential to blanket the entire US in soot.

The good news is Yellowstone park is constantly monitored by more than 40 geological stations in collaboration with the University of Utah, to track ground movement in the park.

Minor tremors are an almost daily occurrence but they are too week for visitors to even notice.

Yellowstone park geologist Jeff Hungerford said: “We’re well aware there is a potential, because it’s a dynamic system, that we might want to actually move people away from an area or close an area.”