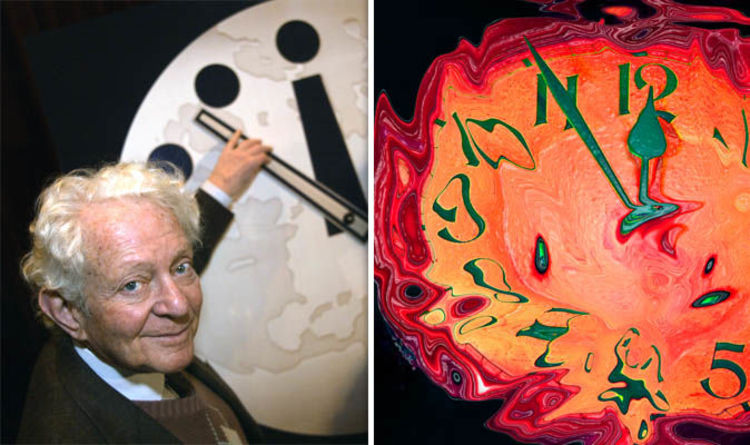 
Since its inception in 1947, the symbolic Doomsday Clock has warned humanity how close the world is to catastrophe hypothetically every year.

It works by judging how near the minute hand is to midnight – the nearer it is, the closer Earth is to disaster.

The dangers by which the assessment is made include nuclear attacks, climate change, cyber warfare and bioterrorism.

The proclamations are made by the Bulletin of the Atomic Scientists, a independent and non-profit body “with a goal of influencing public policy to protect our planet and all its inhabitants”.

Since January 2017, the Doomsday Clock has been set at two and a half minutes to midnight, the second-closest its been since its creation.

2018’s announcement will be at 3pm GMT tomorrow.

Why was the Doomsday Clock set up?

Atomic scientists created the clock in 1947 in reaction to the threat of nuclear war and the prospect of an arms race between the United States and the Soviet Union.

They were part of the Manhattan Project, the World War Two research group that first developed nuclear weapons that led to the atomic bombings of Hiroshima and Nagasaki in Japan.

Co-founder Eugene Rabinowitch said: “The Bulletin’s clock is not a gauge to register the ups and downs of the international power struggle; it is intended to reflect basic changes in the level of continuous danger in which mankind lives in the nuclear age.”

Originally set at seven minutes to midnight, the hands have been back and forth 22 times.

The biggest threat was judged to be in 1953 when the US created the hydrogen bomb – at that point the clock was set at two minutes to midnight.

Why is the clock set to move closer to midnight tomorrow?

Two days after President Trump’s inauguration in January 2017, the Clock was moved 30 seconds closer to midnight.

Donald Trump’s “disturbing” comment on the use of nuclear weapons and his disbelief in climate change also factored, even though historically the bulletin does not account for individuals’ actions.

A statement from the board’s Executive director said: “But wavering public confidence in the democratic institutions required to deal with major world threats do affect the board’s decisions.

“And this year, events surrounding the US presidential campaign—including cyber offensives and deception campaigns apparently directed by the Russian government and aimed at disrupting the US election—have brought American democracy and Russian intentions into question and thereby made the world more dangerous than was the case a year ago.”

There is a real danger that the Doomsday Clock could move even closer to disaster tomorrow, based on the darkened global landscape over the last year.

Bruce Blair, co-founder of anti-nuke campaigners Global Zero, told Daily Star Online: “2017 was a bad year for the clock and portends a worse year with the distinct possibility of a catastrophe of global proportions.”

Hidden ‘Hunger Stones’ Reveal Drought Warnings From The Past : ScienceAlert
‘Extreme Heat Belt’ to Snare 100 Million Americans in Decades, Scientists Warn : ScienceAlert
A Nuclear War Could Starve Billions, But One Country May Be Safer Than The Rest : ScienceAlert
Robot Shows It’s Possible to Swim Through The Emptiness of a Curved Universe : ScienceAlert
Scientists Have Found A New Way to Detect Alien Worlds Beyond Our Solar System : ScienceAlert