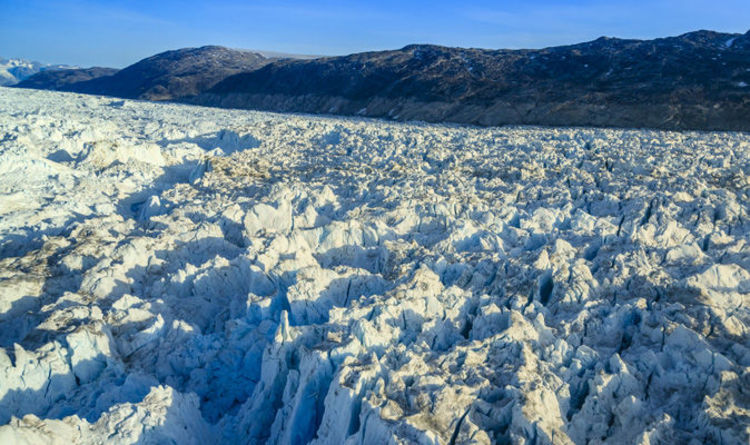 
The gigantic iceberg was four and a half miles wide when it broke away from the Helheim Glacier in Greenland.

The process took just 30 minutes for the entire iceberg to break away into the sea, and New York University have condensed it in to a video just shy of two minutes.

Such was the monumental scale of the giant ice shelf you can actually see the sea level rise slightly as the process occurs.

The phenomenon is known as calving, and while it is normal iceberg behaviour, researchers say that it is becoming much more common and will contribute to rising sea levels.

David Holland, a professor at NYU’s Courant Institute of Mathematics and NYU Abu Dhabi, who led the research team, said: “Global sea-level rise is both undeniable and consequential.

“By capturing how it unfolds, we can see, first-hand, its breath-taking significance.”

The team were fortunate to capture the phenomenon on video, saying they had forewarning thanks to the large rumbling and loud cracking they could hear beforehand.

Team member Denise Holland said: “It’s hard to describe. It’s like a jet engine, lots and lots of big booms, and it ricochets all over the calving.

“I turned on my camera, and I was lucky to catch what we saw.”

On the other side of the Arctic lies the Thwaites Glacier, and scientists have previously stated that it could crumble at any moment.

The collapse of the glacier, which is roughly the same size as the UK, could trigger a domino effect – the collapse of the Thwaites Glacier could cause the Pine Island Glacier to crumble, which could lead to rising sea levels of more than one metre.

Experts worry the collapse of these two huge glaciers could then trigger the downfall of the entire West Antarctic Ice Sheet. In this instance, sea levels could rise by a terrifying three metres.

Climate models have shown that a sea level rise of more than two metres could permanently submerge large parts of the British coastline with the likes of Hull, Peterborough, Portsmouth and parts of East London and the Thames Estuary all under threat.

Researchers from the UK’s Natural Environment Research and the US National Science Foundation (NSF), who are leading the project, said there are “reasons to suspect” the damage could be irreversible.

“Thwaites has the potential to affect sea levels worldwide.”

Weight Lifting in Old Age Does More Than Just Keep Your Muscles Strong : ScienceAlert
It Turns Out There Is Such a Thing as Good Gossip, According to New Research : ScienceAlert
Biology Inspires a New Kind of Water-Based Circuit That Could Transform Computing : ScienceAlert
Control of a 6-Qubit Processor in Silicon : ScienceAlert
Bitcoin’s Climate Impact Is Bigger Than Beef Farming – And It’s Only Getting Worse : ScienceAlert