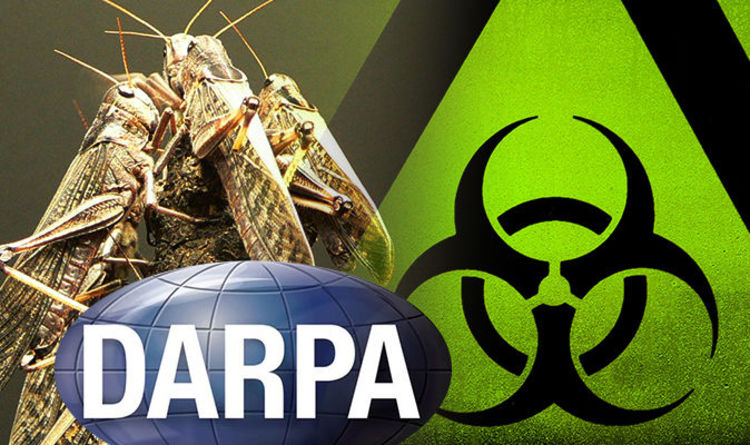 The US government’s Defence Advanced Research Projects Agency (DARPA) has come under fire for reportedly developing insects to deliver a new class of biological weapon.

Set up in 2016, DARPA’s Insect Allies program was purportedly created to ensure food security in the face of environmental disasters, natural pathogens and intentional attacks.

Mass crop failure has potentially catastrophic consequences for hundreds of millions around the world reliant on staples such as wheat to meet their basic nutritional needs.

Genetically protecting crops is slow, as the alteration must be passed down through successive generations before it takes hold.

So DARPA scientists began introducing genetically modified viruses that can directly edit crops’ chromosomes by spreading them through bugs.

For example, if a cornfield were hit by a drought or suddenly exposed to a pathogen, Insect Allies would be able to send out an army of the GM-carrying insects to slow the plant’s growth rate.

But the project was recently criticised by scientists led by Richard Guy Reeves at the highly-respected Max Planck Institute for Evolutionary Biology, who claim the technology could be sued for much more harmful means.

The research team said Insect Allies “appears very limited in its capacity to enhance US agriculture or respond to national emergencies”.

And they added: “As a result, the program may be widely perceived as an effort to develop biological agents for hostile purposes and their means of delivery.”

Potentially, the viruses being introduced could do harm instead of good, as the bugs could be used to disperse agents preventing seeds from growing.

“Insect weapons could be extremely transmissible to susceptible crop species, particularly where insects were used as the means of delivery,” the researchers wrote.

And they claimed the use of an insect-based system points to “an intention to develop a means of delivery of insects for offensive purposes.”

The team of scientists believe the cutting-tech could easily be simplified and used to develop a brand new class of biological weapons.

They wrote: “In our view, the program is primarily a bad idea because obvious simplifications of the work plan with already-existing technology can generate predictable and fast-acting weapons, along with their means of delivery, capable of threatening virtually any crop species.”

He said: “We require numerous, layered safeguards at every point in the Insect Allies systems to minimise risks and ensure treatments are delivered only to the intended plants.

“Farmers and agricultural researchers constantly contend with threats to crops introduced by insects spreading harmful viruses to the plants.

“We determined to flip that scenario and use insects that are normally plant pests to deliver engineered viruses to induce expression of positive, protective traits in plants.”

Another cause for scepticism about the project’s real intentions is that it is being led by a Defence Department agency, rather then the Dept of Agriculture.

“There are two main reasons that DARPA is the right choice to lead this research”, said Dr Bextine.

“First, the stability of our domestic agricultural sector represents a critical, but often under-appreciated element of national security.

“If DARPA can deliver technologies that keep the US resilient in the face of threats, we preserve stability and readiness at home and diminish a source of instability abroad.

“Second, DARPA has a unique charter to pursue revolutionary and technologically high-risk projects that go well beyond the incremental advances typically funded by other research and development organisations.

“Whereas another agency might fund the next generation of aerial spraying technology, DARPA reaches for fundamentally new ways of delivering more precise, efficacious treatments through systems that can be readily adapted to confront a range of potential threats”, he added.

“Spray technologies are not sufficiently precise to deliver targeted genetic therapies to mature plants in the field.

“Insects, on the other hand, are not only able to access these tissues when they feed, but, in fact, have a specific affinity for them.

“Further, the use of insects as a delivery method can be readily scaled to cover the vast areas that may need to be treated to protect against a threat.

“Spray technology has additional drawbacks – they blow into other areas, seep into soil, and can affect more than the intended target.

“Often, large quantities must be applied to achieve the desired effect, which incurs significant cost and waste, impacts that would be magnified when attempting to deploy sprays at scale.

A Strange Thing Happens to Wolves Infected by Infamous Mind-Altering Parasite : ScienceAlert
Mars Once Had So Much Water, It Could Have Been An Ocean World, Scientists Say : ScienceAlert
Crocodiles Seem to Be Thriving in a Toxic River That’s More Like a Sewer. Here’s Why : ScienceAlert
A ‘Wormhole’ Built on a Quantum Computer Teleported Information as Predicted : ScienceAlert
Psychologists Found a Weird Trick That Changes How Food Tastes : ScienceAlert