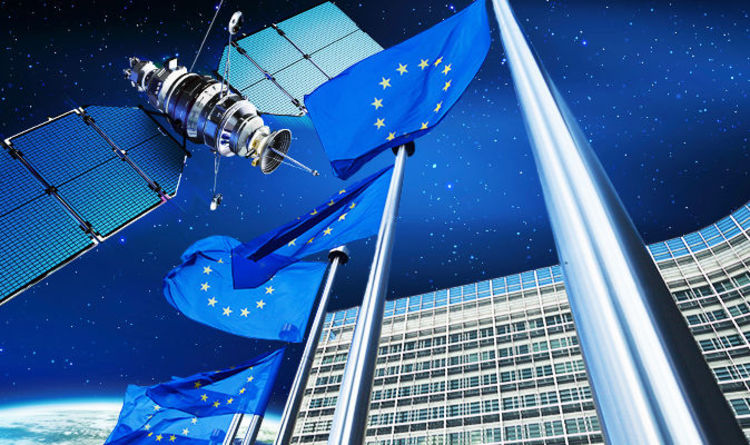 
Brussels has warned the UK will be forced to quit the project post-Brexit sparking anger in both Whitehall and the country’s scientific community.

But some experts were suggesting kicking out British innovation could ground the £8.5billion – which relies on ground stations in Britain’s Falkland Islands and Ascension Island.

Express.co.uk found British companies backing the Government position and that some could withdraw their vital technology from the European project.

Britain has contributed a massive £1.2billion of the estimated £8.5billion cost of the experimental Galileo GPS system, with British companies playing a major part in development.

In spite of Britain’s prominent role in getting Galileo into orbit, the European Commission has said it would “no longer be appropriate” for the country to be involved following Brexit in 2019.

The system is a rival to the American GPS global positioning system and will use 30 geo-stationary satellites in orbit around the globe when it comes online in 2020.

However, British companies and the Government are understandably unhappy with Brussels perceived political bullying over Galileo, and could turn their attention to helping the UK create its own rival satellite project.

QinetiQ, just one of the British companies involved in the Galileo Project, has said that it will back the UK Government’s decision.

A spokesman for the company, which helped with the development of signal receivers on Galileo, told Express.co.uk: “From our perspective, we are supporting the Government’s position and we certainly want this mess cleared up.”

QinetiQ also hinted that it could withdraw its technology from the Galileo Project if the UK is banned from participating any further – although the spokesman added any withdrawal “depends on our contractual obligations”.

To make matters more confusing, the European Space Agency (ESA) has confirmed to Express.co.uk that “the UK will remain an ESA Member State after Brexit and there are no changes with respect to this”.

If the UK is still involved in the ESA and the ESA is working on Galileo, surely the UK will be involved in Galileo?

More confusingly the European Commission tells express.co.uk: “We have never said that the UK cannot take part in the Galileo project.

“The UK just cannot access the security aspects of it.”

However, “Negotiations for Galileo and UK’s involvement following Brexit are still ongoing”, says the ESA.

The Government is already looking at creating its own £4billion satellite navigation project if relationships continue to sour.

A recent study found that if the UK were to launch its own satellite system, it would bring in £3.7billion and create up to 5,000 jobs, which QinetiQ would be happy to be involved in.

The spokesman for QinetiQ said that the company’s loyalty does lie with the UK, and that it fully backs a British satellite project.

He said: “What we do is pretty specialised and unique and if the Government does decide to go for its own satellite, we are certainly in a position to help out.”

Another British company, Surrey Satellite Technologies, which is also involved in Galileo, said that due to the “political sensitivities and complexities around Galileo”, it would not comment.

Brussels has largely sought to entirely freeze Britain out of the Galileo project after its decision to leave the EU back in June 2016, which has created a series of rifts between the European Commission and Westminster.

The UN Just Made a Historic Climate Deal. Here’s What You Need to Know : ScienceAlert
Scientists Revived Ancient ‘Zombie Viruses’ Frozen For Eons in Siberia : ScienceAlert
The Milky Way’s Halo of Stars Isn’t The Neat Sphere Astronomers Expected It to Be : ScienceAlert
‘Baby Brain’ Is Real, Scientists Confirm, And We May Finally Know Why : ScienceAlert
Colossal Exoplanet Is One of The Most Massive Super-Earths Ever Discovered : ScienceAlert