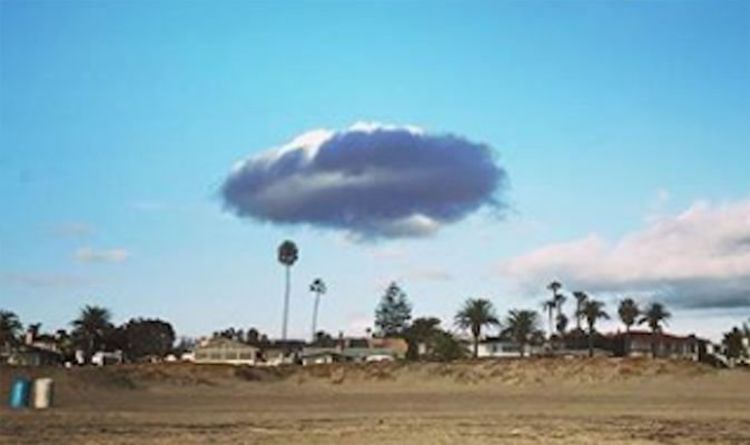 
One resident of San Diego managed to capture an image of what he believes is a UFO – or at least a spaceship which is under a cloaking device. The image shows a strange circular, low-lying cloud which resembles a classic flying saucer. While many have claimed this is just an odd cloud formation, some UFO experts believe it is an alien spaceship which is trying to keep a low profile.

Conspiracy theorists believe that UFOs sometimes resemble clouds, as this way they can monitor the public without making them aware that they are being watched.

“The fact that this cloud was so low was clearly suspicious, however its shape totally gives away the true shape of the UFO.

“It is a huge disk as you can see from the lines at the bottom of the craft.

“UFOs often create cloud cover around them when they want to fly unusually low to scan the residence below.

“This way they do not frighten anyone and people who see the cloud only shrug their shoulders and ignore it.

“However occasionally a person can sense being watched and will notice the cloaked UFO and take its photo to share with others.”

However, it would seem that the most likely explanation would be apophenia – where the brain recognises specific patterns in things.

If someone has hinted something looks like a UFO for example, the brain will try to picture it in that way.

Bar-Tailed Godwit Breaks Record by Flying Nonstop From Alaska to New Zealand
Huge, ‘Impossible’ Crystals in Denmark Have Finally Been Explained by Scientists
A Controversial Lost Tectonic Plate May Have Been Discovered by Geologists
Could Schrödinger’s Cat Exist in Real Life? Physicists May Soon Find Out
World’s Largest Solar Farm to Be Built in Australia