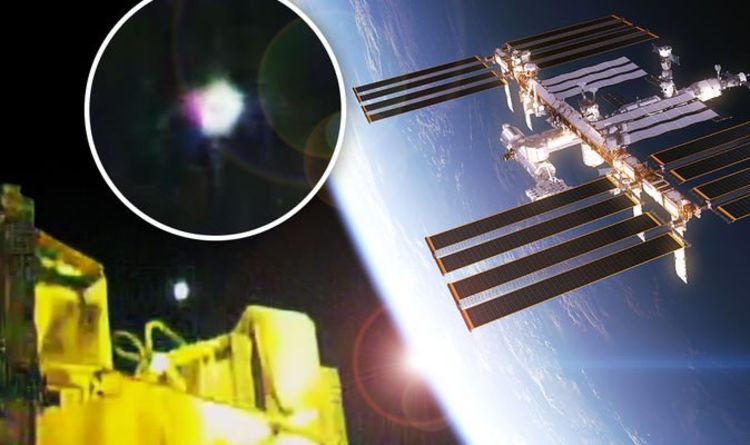 
Self-styled UFO expert Scott Waring made the outlandish claims about the ISS anomaly on his etdatabase.com site. He said: “I was watching the NASA live stream and noticed this huge glowing object.

“The anomaly was able to match the speed with the space station.

“The UFO was visible on NASA live cam for 15 minutes.”

A timestamp on the video confirms the bizarre incident took place on Sunday, January 5, 2020.

To the left of the grainy footage is a yellow portion of the orbiting space station.

Mr Waring said: “The movement of a UFO is very important and the ability of the UFO to change trajectory like that is pretty incredible.

“At this point the object begins to move away from the space station at incredible speed.

“I know this because the object becomes smaller, which means it is moving off into the distance.

“The spherical object is glowing, indicating the UFO is very powerful.”

Mr Waring believes this new video adds to the weight of evidence that NASA is complicit in hiding the presence of alien visitors to Earth.

Mars Once Had So Much Water, It Could Have Been An Ocean World, Scientists Say : ScienceAlert
10 Days After Its Launch, Orion Has Successfully Entered Lunar Orbit : ScienceAlert
Do You Need to Drink Eight Glasses of Water a Day? It’s Complicated : ScienceAlert
Mummies With Golden Tongues Discovered in Ancient Egyptian Necropolis : ScienceAlert
Alzheimer’s Gene Doesn’t Guarantee Dementia. Here’s What You Can Do to Reduce Risk : ScienceAlert