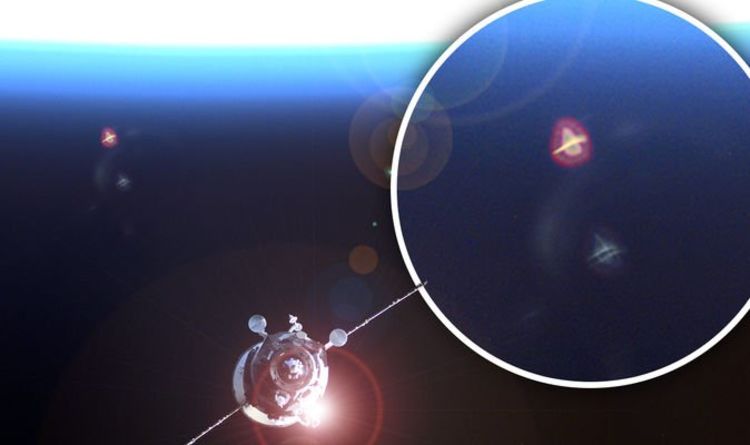 
Waring took to his etdatabase.com blog to expound on his theory about the purported extraterrestrial encounter. He said: “I found a glowing UFO near a module bringing supplies to the International Space Station (ISS).”

The alien life conspiracy theorist proceeds to zoom-in on the space anomaly to get a clearer look at the bizarrely coloured pink speck.

He said: “The UFO is kind of crazy looking.

“It is vaguely triangular in shape with another triangle intersecting it at a different angel.”

Waring also pointed to what he claims is a second, fainter UFO close underneath it, which he believes could be “cloaked”.

The accompanying captain reads: “Backdropped by the blackness of space and the Earth’s horizon, an un-piloted Progress supply vehicle approaches the aft port of the Zvezda Service Module (out of frame) on the International Space Station, completing a two-day automated flight.

“The Progress 6 craft, which launched from the Baikonur Cosmodrome in Kazakhstan on Monday, November 26, 2001, carried more than a ton of food, fuel and equipment for the Expedition Four crew members.”

The latest UFO sighting made by Waring swiftly attracted scores of comments to his YouTube page.

Kirstiekloye2 believes the anomaly may not be a ship, writing: “Possibly an organic being in space alike the one reported during the event in 2004 rather than a ship of some sort?”

Crocodiles Seem to Be Thriving in a Toxic River That’s More Like a Sewer. Here’s Why : ScienceAlert
Millions of ‘Silent Synapses’ Could Be The Key to Lifelong Learning : ScienceAlert
An AI Found an Unknown ‘Ghost’ Ancestor in The Human Genome : ScienceAlert
A Strange Thing Happens to Wolves Infected by Infamous Mind-Altering Parasite : ScienceAlert
Mars Once Had So Much Water, It Could Have Been An Ocean World, Scientists Say : ScienceAlert