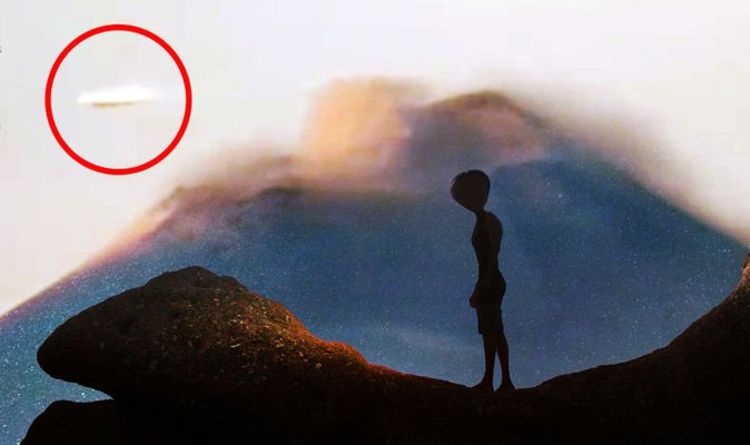 
Grainy live cam footage of the erupting Popocatépetl Volcano appears to show an unexplained object skimming the top of a the smoke plume. The footage, timestamped as taking place on 8.15am on August 19 this year, has been described “maybe the best sighting of 2019”. Self-styled extraterrestrial life advocate Scott Waring took to his etdatatbase.com blog to speculate about the alleged UFO sighting.

He said: “I believe I have recorded video of an actual UFO over a Mexican volcano via a live cam.

“The object does not appear to be an aeroplane and it is flying over a live volcano which erupts every 10 to 12 hours.”

Mr Waring proceeds to slow the footage down to allow viewers to watch the mystery object seemingly streak only just above the plume spewing from the volcano’s mouth.

He added: “Who would endanger an entire jet by flying over the mouth of a volcano? I don’t think anyone would do that.

“Now, I don’t know of any 200m-long aeroplanes, but this looks really big to me.”

Mr Waring also points to how the apparent UFO is not visible in the split-screen of the volcano footage.

He said: “The UFO is totally invisible. This is just another camera of the same volcano in a different position.

“It doesn’t makes sense to me. How could it not show up on the another cam?

“That sounds like the cloaking technology of aliens to me. So I’m calling this a real UFO.

“I have been watching this volcano for years and I used to catch some good stuff here.

“But I have never ever seen an aeroplane flying over this live volcano.

“This volcano erupted only a few hours prior, making this just unbelievable to me.”

Mr Waring later transforms the video into a negative format, then focuses the footage with additional contrast.

He said: “It looks like a disk – you can see the bottom of it is a little bit lower and the higher part is curved.

“Guys this screenshot doesn’t lie: you don’t see any contrails, any wings and even a cockpit.

“I have never seen anything this close and this out-of-focus.”

Scores of comments were left on the ET Data Base YouTube channel only hours after the mystifying footage was uploaded.

Mike Littlejohn added: “After you changed the contrast it seems to have that(I’ll just say energy field) around it.”

However YouTube user Joshua Says revealed he was less than convinced by the dubious alien UFO claim, writing: “Looks like a conventional aircraft and is probably closer to the camera and further from the volcano thank you think.”