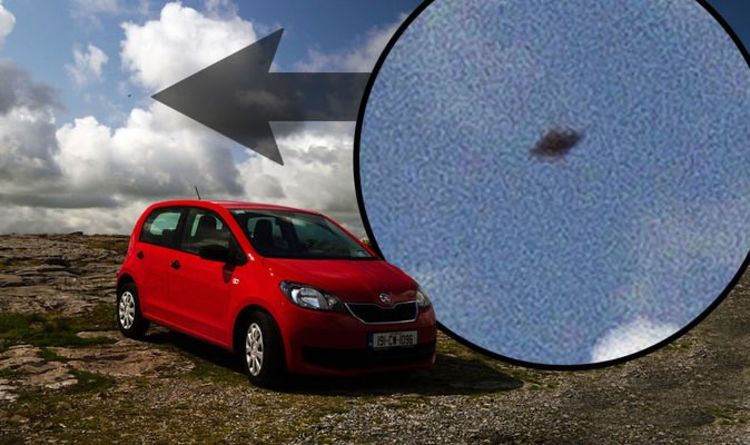 Self-described alien UFO authority Scott Waring detailed his claims on his etdatabase.com website. Mr Waring wrote: “The eyewitness took a photo of his car in Doolan, Ireland, on August 19. “And when he got home he noticed a thick disk near the clouds.”

The unedited image shows a landscape with a car prominently in the foreground with an approximately pixel-sized speck left of centre.

On his blog, Mr Waring proceeded to speculate about the purported UFO’s dimensions.

He said: “The disk is wider at its centre and thinner at is ends.

“To top it off, the disk is tilted, which Area 51 scientist Bob Lazar said is necessary if a disk is moving.”

UFO sighting: A purported “dark disk” has been spotted in Ireland (Image: Etdatabase.com)

UFO sighting: The number of sightings has fallen (Image: Getty)

Mr Waring then theorised that UFOs can be seen anywhere in the world.

But he added some locations seem to have a higher change of seeing one than others.

He said: “In a world where everyone is looking down at their phone, its no wonder why sightings are down this year.

“Few people bother looking up at the sky.”

The declines reportedly started in 2014, when UFO reports peaked.

Sightings have since reduced drastically to 55 percent of that year’s combined total.

This has led to many UFO interest groups folding, and the disclosure of numerous previously-classified government documents.

Before the 1940s, reports of sightings of objects in the sky were extremely rare.

Then, at the predawn of the space-age, around the time of the Roswell conspiracy, UFO culture was born.

Experts in the UFO phenomenon believe both technology and more transparent government are responsible for the decline of UFO sightings.

Cultural historian Stuart Walton told the Guardian last year: “Belief in UFOs is definitely in a state of decline, along with much else that could be classed as paranormal.

“Part of the reason is that the technology for providing documentary evidence of such matters is now widely available to everybody with a smartphone, and such purported evidence as there is on YouTube looks extremely threadbare.”

Joseph Baker, sociology professor at Tennessee State University, added: “It’s actually better for UFOs when ufologists can claim that ‘the powers that be know everything and are hiding it from us’ rather than seeing that the government appears to have basically the same info about UFOs as the public: namely grainy, inconclusive visual evidence.”

One Simple Idea Makes It Much Easier to Manage Your Weight Over Time : ScienceAlert
An Expert Explains Why The Radioactive Water Stored at Fukushima Should Be Released : ScienceAlert
An Iceberg The Size of London Has Broken Free From Antarctica Ice Shelf : ScienceAlert
This Physicist Says Electrons Spin in Quantum Physics After All. Here’s Why : ScienceAlert
Scientists Create Shapeshifting Humanoid Robot That Can Liquefy And Reform : ScienceAlert