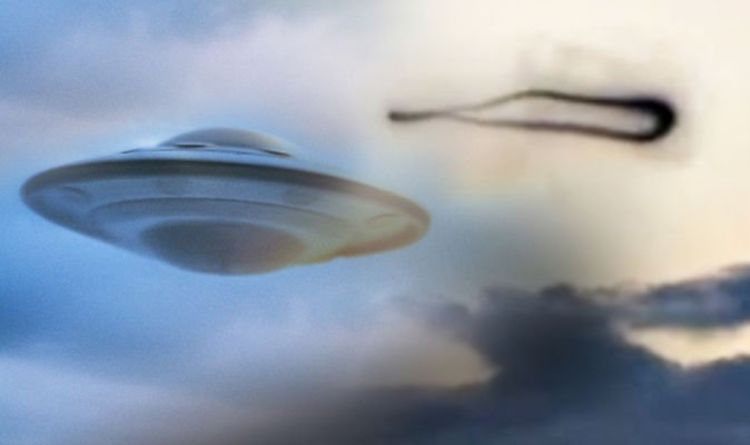 
The idea intelligent life is not restricted to Earth has long fired imaginations. And the number of Unexplained Flying Objects (UFOs) which witnesses believe are aliens travelling to Earth appears to be rising. The latest apparent alien spacecraft sighting has taken the shape of a strange black ring over “UFO hotspot” Denver.

He wrote: “A possible UFO sighing was seen in Denver two weeks ago.

“The whole city seemed to see it and the exact explanation of what it is remains a mystery.

“Many explanations from fireworks to volcanos have been given.”

However, the self-proclaimed UFO expert offers a more extreme explanation for the mysterious ring.

Waring wrote: “However Denver is a UFO hotspot with most of its citizens having seen UFOs in the area.

“It’s totally possible that this ring is actually the outline of an alien cloaked craft that is having difficulties keeping cloaked.

“Its also possible that a UFO shot off so fast that it left a black ring around it.

“Lots of white glowing balls have been seen over the Denver area near the Rocky Mountains for decades, so its no surprise to see such oddities in the sky above Denver.”

The perplexing phenomena even made the local news, with Chirs Spears of CBS4 saying: “OKAY … here’s an odd one for you.

“This was caught on our city cam looking due west around 740 pm.

“We also had a viewer in LoDo film it. His video was more of a perfect circle.

“I am baffled at how to explain this one. LOL! CRAZY! And creepy.”

The footage of the apparent UFO sighting attracted scores of comments on YouTube.

YouTuber El lee oh wrote: “That’s the other end of the black hole that NASA showed us the other day the aliens are coming.”

They wrote: “This ‘ring’ is a byproduct of the pyrotechnics used during a Supercross event at Mile High Stadium.”

The Moon Stole Something From Deep Inside Earth Eons Ago, and Scientists Can Prove It : ScienceAlert
Extreme Drought in Italy Reveals Hidden Bomb Submerged in River Since WWII
An Experimental Surgical Robot Is Headed to The International Space Station
‘Structured Water’ Is Not What People Claim. Don’t Believe The Hype, Scientist Says
Plants Have Been Keeping a Secret From Us About How Thirsty They Actually Are : ScienceAlert