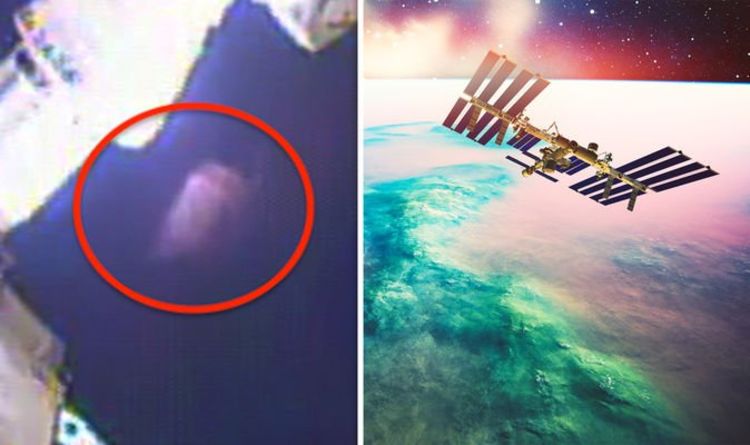 
During a routine manoeuvre of a mini-shuttle on the exterior of the ISS which was being live-streamed to the world, a strange light appeared in the distance. The light gradually got closer, before the live stream of the orbiting laboratory went offline. This has led some to believe NASA is purposefully cutting the live feed to hide the evidence that aliens have been visiting Earth.

Prominent UFO hunter Scott C Waring was the first to spot the alleged alien spaceship, saying it was using a cloaking device to monitor the ISS in secret.

Mr Waring wrote on his blog UFO Sightings Daily: “I was looking at the live Internet NASA cams when I caught an object near the space station.

“I first caught a small object, which is the same UFO, just further away and a few hours earlier. Then I caught the same UFO closer up.

“This time it was about 30-50 meters away from the space station. It was huge! The UFO was partially cloaked but was revealed by sunlight bouncing off of it.

“Strangely enough, the shape came more into focus later in the video and what I thought to be a thick round cylinder turns out to be something way more complex looking.

“Now do you see why NASA deliberately causes distortions during the live cam? Its so we the public will stay in the dark, but as you see, thinks are lighting up.”

Scientists who have worked for NASA in the past have a much simpler explanation for all of the bizarre UFO sightings around the ISS being reported.

It Was an Asteroid, Not Volcanoes, That Wiped Out The Dinosaurs, New Study Finds
Gorgeous New Footage Lets You Fly Over a Vast, Ice-Filled Crater on Mars
Uganda’s Infamous ‘Selfish’ Tribe Has Been Misunderstood For Almost 40 Years
Math Genius Has Come Up With a Wildly Simple New Way to Solve Quadratic Equations
Mysterious Abandonment of Once-Great Maya City May Finally Be Explained