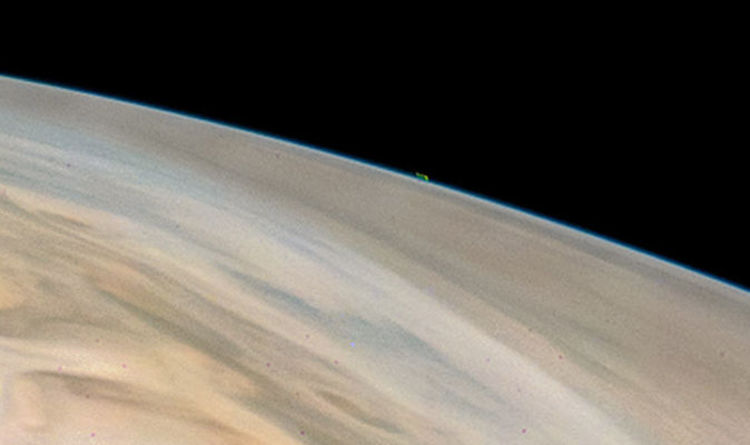 
An image released by NASA seems to show a strange green anomaly just past the edge of Jupiter.

The image was quickly picked up on by Youtube conspiracy channel ‘UFOmania – The truth is out there’ who posted a short clip alongside the description: “A NASA image of Jupiter shows a massive unidentified green anomaly just above or on the surface of Jupiter.

Another alien hunting site, UFO Sightings Hotspot also spotted the anomaly, claiming it is irrefutable proof that highly advanced extraterrestrials are visiting the gas giant which is Jupiter.

UFO Sightings Hotspot reads: “A NASA image of Jupiter shows a massive unidentified green anomaly just above or on the surface of Jupiter.

“The green colour probably is the effect of ionising radiation.

“It is said that Jupiter puts out a massive amount of ionising radiation so any probe or UFO in its vicinity is going to be subject to that radiation.

“I don’t think it is an imaging sensor anomaly caused by a high energy particle hitting the sensor since sunlight reflects on the green anomaly.”

However, others had a more logical explanation.

Jupiter is a gas giant so any life there, which is unlikely, would be extremely different to ours.

However, this does not mean it would be impossible for aliens to reside in the clouds of Jupiter.

US Scientist Carl Sagan theorised life on Jupiter would take the form of enormous balloon-like lifeforms that float above the hot gasses on Jupiter’s surface.

He said on his TV show, Cosmos: A Personal Voyage, that “vast living balloons could stay buoyant by pumping heavy gasses from their interiors or by keeping their insides warm.”

He added: “They might eat organic molecules in the air or make their own with sunlight. We call these creatures ‘Floaters’.

“We imagine Floaters kilometres across, enormously larger than the greatest whale that ever was – beings the size of cities.”

Mars Once Had So Much Water, It Could Have Been An Ocean World, Scientists Say : ScienceAlert
Chilling Glimpse Into Our Future if We Survive Another Million Years : ScienceAlert
A Strange Thing Happens to Wolves Infected by Infamous Mind-Altering Parasite : ScienceAlert
A Tobacco Plant Has Been Engineered to Produce Cocaine in Its Leaves : ScienceAlert
Engineers Propose an Ambitious Plan to Bury Excess Carbon at The Bottom of The Ocean : ScienceAlert