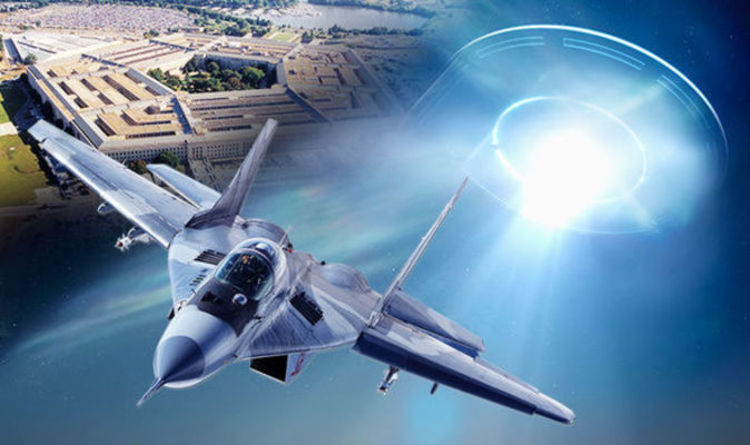 
In December, a New York Times article revealed the existence of a top-secret US Department of Defense department which investigated the UFO phenomenon for five years from 2007 to 2012.

The Advanced Aerial Threat Identification program (AATIP) had a £16million budget to investigate any threat posed by unidentified objects observed by the military.

It was headed by Luis Elizondo, who resigned from the DoD last October to help set up the To The Stars Academy with former Blink 182 singer Tom DeLonge to further UFO research privately.

The article also revealed radar camera footage from a US Navy aircraft flying off the coast of San Diego in November 2004, which was said to show a UFO that “defied physics.”

This footage was part of the so-called Nimitz UFO incident, in which several US Navy personnel reported seeing several tic-tac shaped UFOs over the sea, a case that was investigated by the AATIP.

Mr Elizondo later went on record to say the case, and others looked at by the AATIP, showed “there was very compelling evidence that we are not alone”.

The US-based SETI Institute is a collective of scientists looking for evidence of alien life in the cosmos.

Now, in a radio podcast of the Big Picture Science Skeptic Check, produced at the SETI Institute, a panel of experts looked at the shocking radar video footage.

James McGaha, is a retired US Air Force pilot, astronomer and director of the Grasslands Observatory, who was part of the panel.

He was not convinced the video is proof of anything, let alone aliens.

He said: “People see what they want to see. If you are not trained to know what you are looking at, the brain will fill in the gaps.”

However, Mr McGaha shot this down, saying pilots were not trained observers to astronomical phenomena.

He said: “The camera here detects heat and shows the glow of the heat, not what the object looks like.

“It means the object is warmer than the clouds.

“What it almost certainly is, is the jet exhausts on some aircraft at some distance away, it could be tens of miles away.

“This could be two jet engine on an aircraft – when this was shot it was on video, they saw nothing visually.”

He said the apparent strange movement of the object was just the camera itself moving, and the banking of the plane in pursuit.

He added: “It is likely the strange motion is the result of the camera slewing. The camera slews to lock onto the object and the aircraft itself banking.

“It is unlikely what is seen in the video is moving at all.

“Pilots and police are not trained observers like astronomers and often see what they believe.

“I have 40,000 hours experience of looking at the night sky as an astronomer and thousands of hours of flying at night in airplanes and have never once seen anything I did not understand what it was.”

Mr McGaha said scores of pilot UFO sightings that have talked of craft making high speed manoeuvres and sharp turns were not credible.

He said: “I don’t consider this very credible. People say an object moves at a certain speed, but the eye balls are not calibrated.

“You need to know how far away it is and the size, it is not what most people can do including pilots.

“They see something for a short time, not know what it is, and attach a belief to it to fill blanks with what has not actually happened.”

Objects misidentified as UFOs by all sorts of witnesses were bright planets, rocket launches, balloons, and more recently drones, he said.

Mr McGaha’s observations concur with those of previous sceptical debunkers who concluded the so-called shock video showed another aircraft in the distance.

Seth Shostak, co-host of the podcast, said: “They could certainly release some better evidence, this is just a blob in the central view, it looks like the back end of an aircraft.

“What we have seen from opening the files is not terribly interesting, at least not so far.

“If more evidence comes out and it is better than what has been offered so far, it will be extremely interesting, but I think they know that themselves.”

UFO buffs do not agree that pilot testimonies can be discounted so easily.

One user wrote: “The video in question comes from a gun cam. Fighter pilots are extremely well trained people.

“To assume that they are incapable of using their equipment and are not competent to distinguish a plane from something unusual is really stretching it.

“Regardless, the body of years of honest research establishes that something not from our known civilisation is seen in the skies and in bodies of water. No amount of debunking will change those facts.”

Thomaswastaken added: “The events on video are corroborated by at least one pilot.

“The debriefing from the event says that six pilots saw the object in person. “In addition, a ship and an E2 Hawkeye has the object on radar when acting as air traffic control.

“Until you can explain multiple interacting lines of evidence, you’ve got no business attempting to debunk the account.”