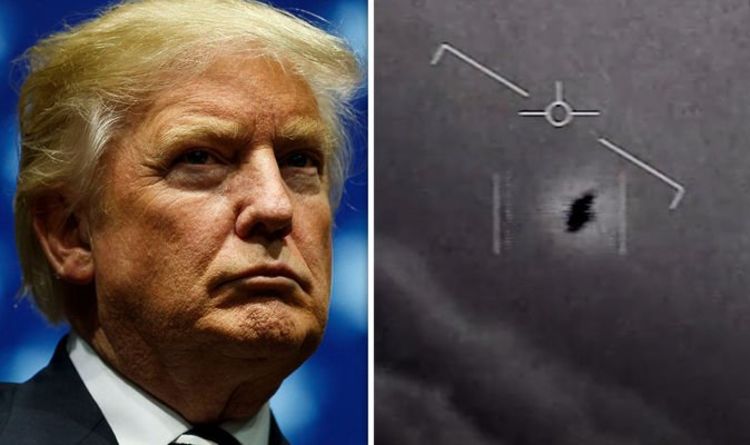 
Trump was interviewed in June after footage of ‘unexplained aerial phenomena’ caused a stir when it was released in 2017. He was interviewed by ABC News, claiming he was briefed on the recent rise in US Navy pilots reporting unidentified aircraft. Interviewer George Stephanopolous pressed Trump, asking him what he made of the claims.

Trump said: “I think it’s probably – I want them to think whatever they think. They do say, and I’ve seen, and I’ve read, and I’ve heard. And I did have one very brief meeting on it.

“But people are saying they’re seeing UFOs. Do I believe it? Not particularly.”

He was then asked if he thought he would know if extraterrestrial life had been confirmed.

This comes as UFO sightings from the US Navy confirmed the spectacular footage of “unexplained aerial phenomena” revealed in 2017 was authentic.

The Navy added the footage shouldn’t have been released to the public eye.

The clips were recorded by Department of Defence officials on two separate occasions.

One clip was recorded near San Diego, California, back in 2004, while the other was filmed off the coast of Jacksonville, Florida, in 2015.

“The Navy has not publicly released characterisations or descriptions, nor released any hypothesis or conclusions, in regard to the objects contained in the referenced videos.”

The common term used for the objects seen is ‘unidentified flying object’ (UFO) but the Navy prefers to call them ‘unexplained aerial phenomena’ (UAP).

According to The Black Vault, the videos are unclassified but were never cleared for release.

US senators were reportedly briefed by the Pentagon in June about recent reports of UFO sightings by Navy pilots.

One of the senators was Mark Warner (D-Va.), who is the vice chairman of the Senate Intelligence Committee.

Politico reported that his spokesperson said: “If naval pilots are running into unexplained interference in the air, that’s a safety concern Senator Warner believes we need to get to the bottom of.”

It was reported the briefing was delivered by the Navy and included staff from the Under Secretary of Defence for Intelligence.

Briefings such as these have been on the rise since it was revealed the Pentagon’s secretive Aerospace Threat Identification Program continues to investigate reported sightings of unknown aircraft.

Members of Congress and their staffers of the Armed Service and Defense Appropriations committees were also briefed, with more meetings expected to follow.

He said: “What this object is that shows up in this video remains to be seen.

It Turns Out There Is Such a Thing as Good Gossip, According to New Research : ScienceAlert
Hubble And Webb Pics Reveal DART Impact Was Even Bigger Than Expected : ScienceAlert
Long COVID Is Still Raising More Questions Than Answers, Say Researchers : ScienceAlert
We Just Got Our Closest View of Europa in 20 Years, And We Can’t Stop Staring : ScienceAlert
Experts Estimate The Scale of The Nord Stream Pipelines Methane Leak : ScienceAlert