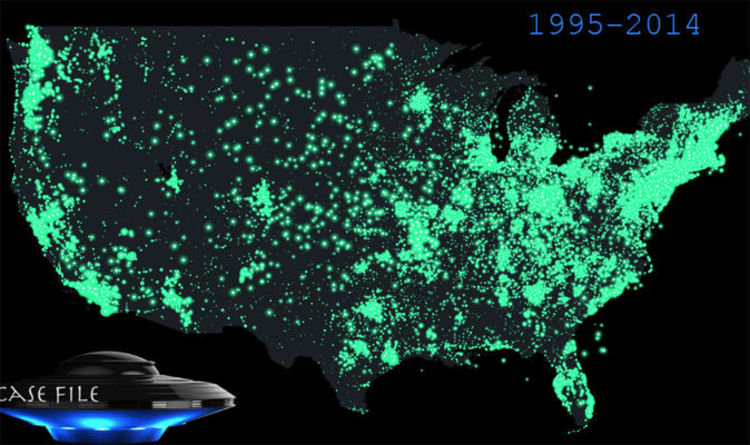 
Sightings recorded by the US-based National UFO Reporting Center (NUFORC), an independent organisation that logs and investigates such cases, have been charted on a map of North America.

The impressive end result shows swathes of green UFO reports spread out across the vast country.

However, it has been suggested the most dense areas for sightings coincide with US military installations.

He wrote: “When laying that same map of reported UFO sightings over a US map showing the locations of all military installations, an interesting trend starts to emerge.

“Many of the regions that seem to show a high frequency of UFO reports coincide with the locations of military installations.

“For the conspiracy minded, this might mean our alien visitors have taken a particular interest in what our military is up to.

“Others might be inclined to conclude many of these supposed UFO sightings may be nothing more than misidentified military aircraft.”

Conspiracy theorists have developed many claims about UFO and US military links.

The most far-fetched of which suggests intelligent aliens have arrived on Earth and been hidden away in top-secret US military installations away from public view.

There, they help military scientists reverse engineer their flying saucer technology, in return for being allowed to abduct a small number of human beings for their own experimentation.

Another slightly less outlandish claim suggests that aliens are not working with the military as above, but so-called black projects are underway at secret bases, such as Area 51 in Nevada.

There, it is claimed, experts try to reverse engineer UFOs that have been recovered after “crashes” in order to produce the most hi-tech spy craft ever built on Earth.

Many claim these “spy craft” being tested are then mistaken for alien UFOs.

Mr Hollings believes the real reason so many UFOs are see near military installations is more straight forward.

He added: “It’s not as unlikely as you may think. Military aircraft are often mistaken for Unidentified Flying Objects in US skies because their shape and behaviour don’t adhere to the norms we’re accustomed to.

“Sometimes, these sightings are the result of the testing of never before seen platforms, but others, it’s simply a matter of military aircraft not exhibiting the same behaviour seen from commercial aircraft above our heads.

“A bright light flying low over a rural region and moving in a seemingly unusual manner could be Martians… but it could also be a Blackhawk in the distance. Most people don’t have a lot of experience identifying either, through no fault of their own.

“Is this a reasonable explanation for nearly 60,000 sightings spread out over a 19-year span?

“Maybe not, but the next time you look to the sky and think you may see an inbound flying saucer, it might be worth doing a quick search to see how far you are from the nearest air national guard base. The answer may surprise you.”

Groups like NUFORC and the larger, but similar US organisation the Mutual UFO Network (MUFON), readily accept the about 95 per cent of the thousands of reports they receive can be explained by natural phenomena and misidentified aircraft built by humans.

The other around five per cent are said to remain a mystery.