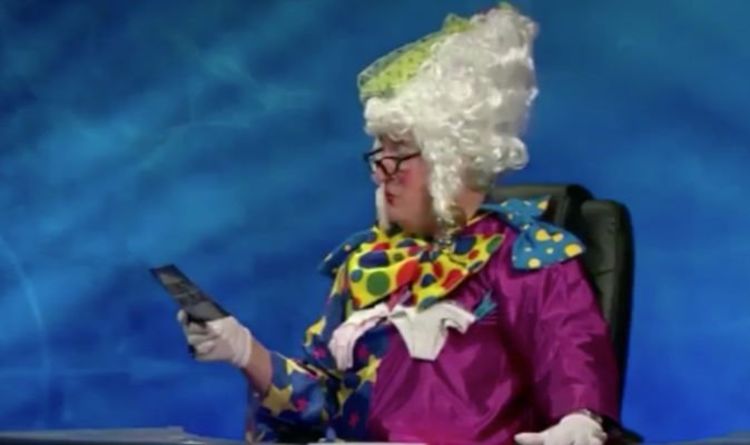 
In the video University Challenge presenter Jeremy Paxman makes a quick costume change as he asks a question in a pantomime outfit. The clip was tweeted by BBC journalist Adrian Bradley with the caption: “In case you missed it – here’s last night’s WTF moment from University Challenge. Genuinely thought I was hallucinating.”

One Twitter user replied to the video saying: “That is excellent work. The team should have been deducted points for missing the obvious ‘oh no they’re not’ gap though.”

Mr Bradley then clarified the scene is shot after the episode: “Well clearly the team (or audience) weren’t there. Which is what makes it so odd.

“Completely unacknowledged – just dropped in for that one answer. Kind of brilliant for that.”

READ MORE: Jeremy Paxman net worth: University Challenge star has this much

Another Twitter user said: Very, very odd. It left me wondering how they managed to convince Jeremy to do that.”

Mr Bradley revealed: “Apparently, according to colleagues who worked with him, he’s very game for this kind of thing.”

A third tweeted: “I’d eaten mushrooms for dinner moments before and started to wonder if there’d been a hilarious mix up in the stock room at Aldi.”

While another said: “Confusing as hell when you were in the audience during filming!”

Two Black Holes Met by Chance, And It Created Something Never Seen Before : ScienceAlert
The UN Just Made a Historic Climate Deal. Here’s What You Need to Know : ScienceAlert
1st Detailed Study of ‘Misokinesia’ Phenomenon Shows It Might Affect 1 in 3 People : ScienceAlert
Colossal Exoplanet Is One of The Most Massive Super-Earths Ever Discovered : ScienceAlert
Unabated Carbon Is Shrinking Earth’s Upper Atmosphere, Scientists Warn : ScienceAlert