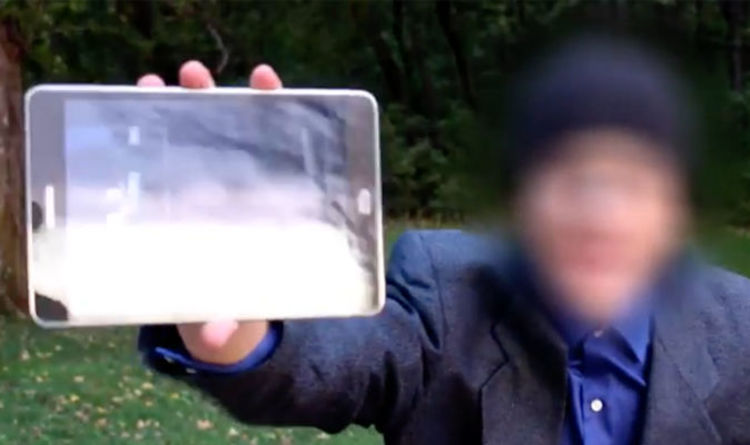 
The extraordinary claims were made in a video published by conspiracy theory YouTube channel ApexTV.

In the video an unidentified man, who claims to be from the year 2045, addresses the camera in a windy field.

He also claims time travel has already been invented using reverse engineered alien technology, but this is being hidden from the public.

The man states: “Time travel exists and is being withheld from the public.

“We as humans currently have the ability to go into the future and come back.

The unidentified man goes on to describe how society operates in 2045.

He sensationally claims: “In the year 2045 humans and robots are converging into one.

“Artificial intelligence governs the entire world. There are no longer countries in the year 2028.

The alleged time traveller claims to have video footage to support his claim to be from the future.

He shows this to the camera, claiming it shows flying cars and huge mega-cities from the year 2045.

“In this video you can see flying cars and you can see the mega-city in which the people live in the future.

“In the future most of humanity lives in these mega cities, these gigantic cities, that you can barely comprehend exist and they take-up most of Earth.”

However many viewers were sceptical about the man’s claim.

One commented: “That video is way too futuristic for being only 27 years in the future.

“Take me with you, then I’ll believe it!”

Researchers in South America Discover a New Species of Tiny but Tough Dinosaurs : ScienceAlert
Robot Shows It’s Possible to Swim Through The Emptiness of a Curved Universe : ScienceAlert
The Moon Stole Something From Deep Inside Earth Eons Ago, and Scientists Can Prove It : ScienceAlert
Many Cat Lovers Are Giving Their Cats Unwanted Affection, Study Suggests : ScienceAlert
Scientists Gave Young Mice The Blood of Old Mice. Then Things Got Weird : ScienceAlert