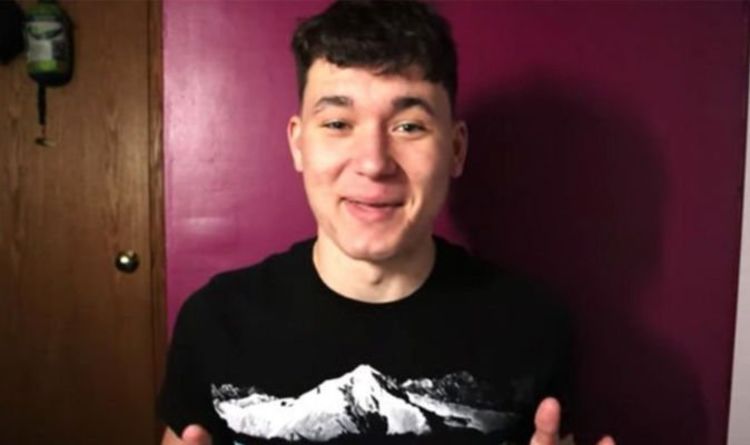 
The “time traveller”, who called himself Noah, claimed to have come from the year 2030. But in a video posted Saturday, 16-year-old YouTuber Denis Bel claimed he was the real Noah. “I can’t do this stupid character anymore,” he said in the video.

Describing the impact “Noah” has had on his life, he went on: “I have to get rid of this looming that’s above me that keeps making me scared of being exposed.”

Later on, Denis alleges that ApexTV tried to make him and his parents sign a non-disclosure agreement so he could never reveal his true identity.

“I know ApexTV is going to be flipping once he sees this video because he knows I’m revealing everything,” he added.

In a series of videos which appeared on ApexTV’s website and YouTube channel, “Noah” made a series of outlandish claims.

These included that he had taken a picture of dinosaurs 66 million years ago, that Britain will rejoin the European Union and that by 2030 most of the US east and west coasts would be underwater.

The videos racked up millions of views over the course of two years.

But in a video posted on Saturday, 16-year-old YouTuber Denis Bel claimed he was the real Noah.

Describing how he rose to international attention through the character, Denis said “Noah” had taken over his life.

In the video, Denis claimed he was first approached by ApexTV when he was 14 years old.

He said the channel, which specialises in paranormal and mysterious videos, offered him money to make a fake time travel video.

But as the character’s popularity rose, Denis said many tried to work out his real identity.

He even had a number of death threats from people who accurately linked him to Noah.

Denis said he also had to delete one of his other YouTube channels which used his real identity after it was flooded by internet users furious about the hoax.

The teenager also apologised to anyone who fell for his fake videos.

Now, Denis says he just wants to be a regular YouTuber.

Earth’s Inner Core May Right Now Be in The Process of Changing Direction : ScienceAlert
Study of 500,000 Medical Records Links Viruses to Alzheimer’s Again And Again : ScienceAlert
Mysterious ‘Zone of Uncertainty’ Inside The Brain Reveals a Surprise : ScienceAlert
Bacteria Can Use Plastic Waste as a Food Source, Which Isn’t as Good as It Sounds : ScienceAlert
Scientists Reveal The Most Distant Galaxy We’ve Ever Found : ScienceAlert