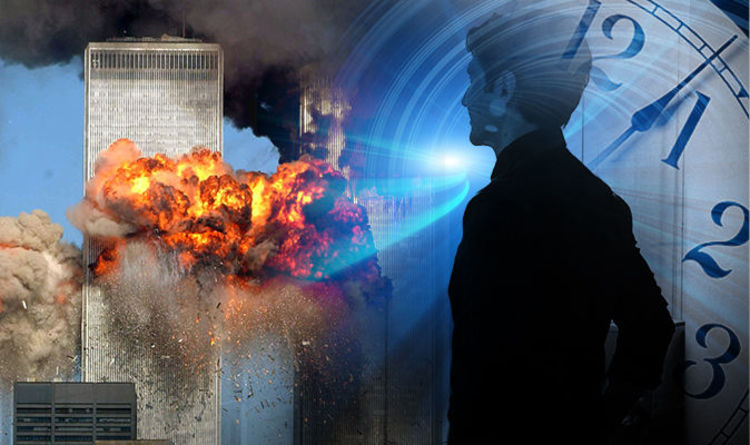 
Michael Phillips declared that the horrifying terror attack was actually a planned “unifying event” to prevent a civil war in America that was set for 2008.

He explained: “My name is Michael Phillips, and I am a time traveller.

“Another time traveller from, I think it was 2038, he came back, his name was Titor, he came back to 2000 I do believe and he thankfully stopped a civil war in America which was supposed to kick off in 2008.

“However, he got involved in the American Intelligence Authorities and the time travel program there.

“It was decided that America needed a single unifying event to bring the country together and to avert a civil war and that event was 9/11.”

Mr Phillips explained that he joined the Army at the age of 18 and was introduced to time machines.

“We carried out normal missions in countries that I’m not allowed to name because I have signed the Official Secrecy Act and from there I was contacted by a government department that called themselves Section 18.

“They told me they were a reconnaissance unit. However, it turned out to be something quite different.

“So I was then transferred to MOD Bottom Down and there they took me into a hangar and in that hangar I saw this 8 foot sized spheroid object.

“I was then briefed on what this object actually was and it turns out it was a time machine.

“This time machine uses to micro-singularities, one at the top and one at the bottom to power the craft. It creates a gravimetric distortion.”

The “time traveller” claimed that UFO’s that are seen the sky are actually “time-space craft” and issued a desperate plea for current Earth inhibitors to address climate change.

He continued: “Distortion then tears a hole in time-space. What you consider as a UFO is actually a time-space craft.

“They have the ability to travel in space and also in time. Many UFO’s that you do see in the skies are in fact time travellers.

“My time at Bottom Down I embarked on a number of missions, the first was to the year 2138, which was very interesting because it was not at all like how I know the Earth to be now. In fact, it was rather polluted and people quite tribal, and it wasn’t a pleasant place to be.

“There were a number of Earth changes, which I do want to warn you about, which did change the Earth.

“Global warming continued, the major groups of the world did nothing to do to change that at all, so this is kind of a plea to change your ways.”

Major Blow as Experimental HIV Vaccine Fails in Late Clinical Trial : ScienceAlert
Newly Discovered Fossil Reveals Hundreds of Teeth ‘Never Seen Before in a Pterosaur’ : ScienceAlert
Study of 500,000 Medical Records Links Viruses to Alzheimer’s Again And Again : ScienceAlert
JWST Has Found Life’s Elemental Building Blocks in The Depths of Darkest Space : ScienceAlert
Babies May Not Be Born With a Microbiome After All, Scientists Say : ScienceAlert