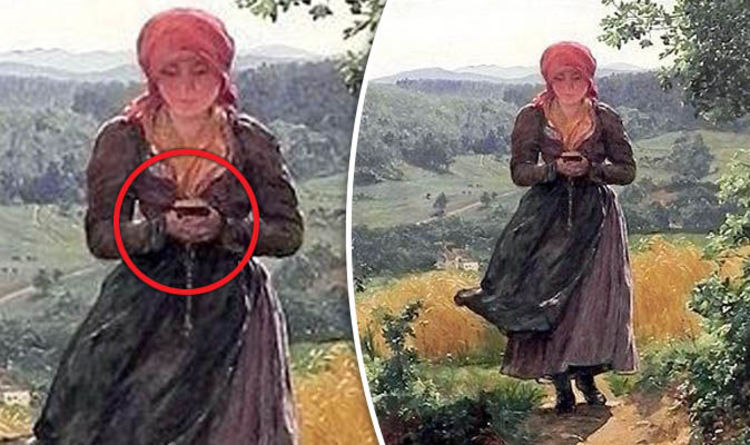 
The scene looks for the world like a 21st century teenager texting or looking at social media while carelessly walking down the street but was actually painted around 1850.

In ‘The Expected One’ Austrian artist Ferdinand Georg Waldmüller,shows a young man waiting on a countryside path holding a pinking flower while a girl approaches with her attention gripped by a small rectangular object in her hands.

The time travel scenario was sparked on Twitter by retired local government officer Peter Russell in response to a similar image being posted.

He told Motherboard : “What strikes me most is how much a change in technology has changed the interpretation of the painting, and in a way has leveraged its entire context.

“The big change is that in 1850 or 1860, every single viewer would have identified the item that the girl is absorbed in as a hymnal or prayer book.

“Today, no one could fail to see the resemblance to the scene of a teenage girl absorbed in social media on their smartphone.”

It is understood that the painting, in fact, shows a girl holding a hymn book while walking as her admirer awaits.

Art expert Gerald Weinpolter said: “The girl in this Waldmüller painting is not playing with her new iPhone X, but is off to church holding a little prayer book in her hands.”