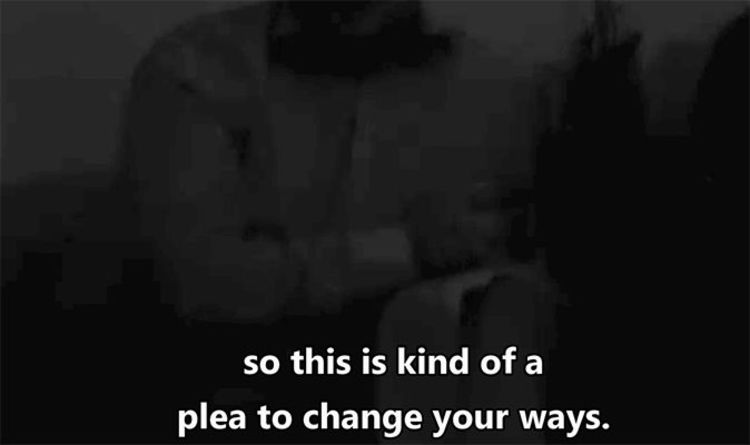 
Michael Phillips, who was introduced at the start of the 13-minute long video despite concealing his face, claims Kim Jong un declared war on the US, who wiped him and most of his army out when they fired a shot back.

Mr Phillips, who speaks with an obscured English accent, said the UK was dragged into the war and that Russia and China forgot against the British army.

He said the three-year conflict followed “a limited exchange” between the US and North Korea in March 2019.

He said: “All in all it was a very fast and brutal war and countless millions were killed.”

He also said nuclear weapons were used the war.

He said the city will be hit by a monster 10.2 magnitude earthquake dubbed ‘The Big One’ by national press and that as a result, California fell 10ft below sea levels that rose making it inhabitable.

He also said US President Donald Trump was impeached after two terms and that an expected candidate made an attempt to swoop in as leader.

Mr Phillips said: “Then you had Oprah Winfrey, believe it or not, to try to run for presidency.

“She was not successful and there was actually a man called Michael Macintosh who actually succeeded.”

He said Mr Macintosh took over from Mr Trump as president in the mid 2020s.

Mr Phillips continued on the theme of the 2020s and said the decade will bring a successful mission to Mars, though according to the so-called time traveller Nasa will not be responsible.

He said: “We did land on Mars, we had the first man on Mars, which was good.

He added: “They sent a number of missions up there in the early 2020s to prepare for the manned mission to Mars.”

Mr Phillips alleges to be born in the year 2043 in the video uploaded by ApexTV, a YouTube channel that has featured much footage on accounts of time travel.

Mr Phillips’s video, viewed more than 4million times since being uploaded on February 22, was widely mocked by commenters.

One wrote: “Can I have the winning lottery numbers please?”

While another simply said: “That’s enough internet for today.”

Mr Phillips said he stepped into a sphere that was hidden in a secret bunker after serving in the army.

He said the sphere was a time machine that used gravimetric distortion to tear hole in time space.

One of the most popular references to time travel was in the 1928 Charlie Chaplin film The Circus, which in the outtakes captures a woman walking across the set using what some claim to be a mobile phone.

The woman, fanatics believe, was a time traveller.