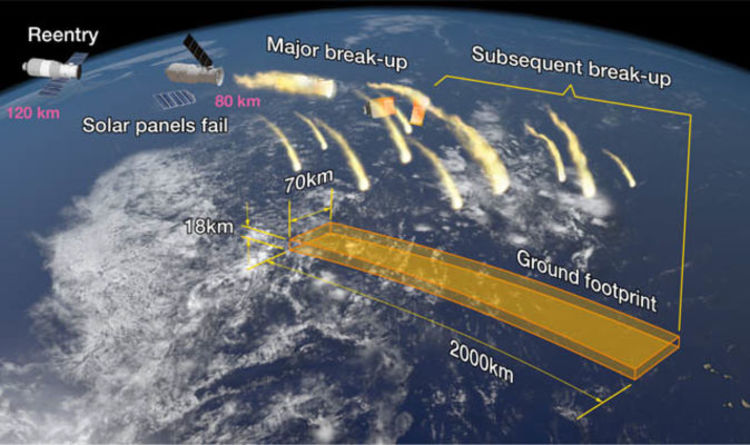 
Where is the Chinese space station NOW?

The European Space Agency is providing updates every day or every two days on its blog.

It provides estimates on the lab’s re-entry window, which is between March 30 and April 2.

The agency said: “Reentry will take place anywhere between 43ºN and 43ºS.

“Areas above or below these latitudes can be excluded. At no time will a precise time/location prediction from ESA be possible.”

Aerospace Corporation, a non-profit spaceflight research company, has a re-entry dashboard on its site.

The website presents a map of the spacecraft’s current position and orbit and its re-entry prediction.

Tiangong 1’s current altitude is 209.46802887km, according to Aerospace Corporation and it has just passed the coast of Madagascar and is moving across the Indian Ocean.

The company predicts the lab will land April 1, plus or minus two days.

China’s Manned Space Engineering Office has been making a daily announcement on the average orbiting height of the lab since the middle of March.

The agency said the land could fall between March 31 to April 4.

The lab can also be tracked on N2yo.com, a satellite-tracking site established in 2006.

The site offers real-time tracking of the spacecraft’s orbiting period, a map of the lab’s location, such as the countries and oceans it is flying above and its orbiting speed – it is currently orbiting Earth once every 90 minutes.

When will it crash to Earth?

The China Manned Space Engineering expects the lab to re-enter the atmosphere between March 31 and April 4.

Whereas Aerospace Corporation has predicted the re-entry to be April 1, plus or minus two days.

However the company said it is very difficult to predict the exact timing of a space object’s reentry.

‘Funky Worm’ Fossil Helps Explain The Mysterious Origins of Amphibians : ScienceAlert
An Iceberg The Size of London Has Broken Free From Antarctica Ice Shelf : ScienceAlert
These 5 Traces of Ancient Ancestors Still Exist in Human Bodies Today : ScienceAlert
Bacteria Can Use Plastic Waste as a Food Source, Which Isn’t as Good as It Sounds : ScienceAlert
The Latest Milky Way Survey Shows Off an Incredible 3.32 Billion Celestial Objects : ScienceAlert