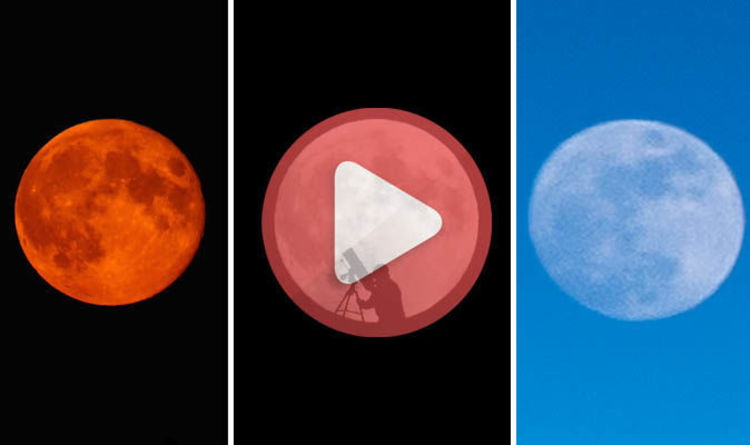 
The “celestial rhythms” will line up on the night of January 31 when the second supermoon of the year rises hot on the heels of the January 1 and December 3 supermoons, NASA said.

The American space agency dubbed the event a ‘Supermoon Trilogy’ but the space boffins are particularly excited because it coincides with three other lunar events.

A Blue Moon is rare enough – it only rises once every two-and-a-half years – but the last Blue Moon Total Eclipse tandem was witnessed 150 years ago. Now it is joined by a Supermoon and Blood Moon.

Unfortunately, the entire event will be confined to the Eastern Hemisphere, covering large swathes of Asia and the Pacific.

But the good news is that robotic telescope service Slooh is here to help those who would otherwise miss it.

Audiences have been invited to partake in the official Slooh Blue Supermoon Total Lunar Eclipse lifestream at 10.45am GMT (5.45am EST) on Wednesday, January 31.

Slooh said: “The Supermoon Trilogy we’ve been experiencing since December will end with a bang on January 31st, combining a Supermoon, a Blue Moon, and a Total Lunar Eclipse.

Sloth’s dedicated team of astronomers and space experts will be on hand to guide the viewers through the breathtaking event.

Alongside the live stream, Slooh will also announce the winner and runners-up of the Fenimore Cooper Prize for Eclipse Writing, which kicked off in August 2017.

On the night of the spectacle, the Supermoon will reach its point of perigee – which is within 10 percent of its closest possible distance to Earth.

Thereafter in parts of the world, the moon will take on a “reddish hue”, according to NASA, an event that is known as the Blood Moon.

The Blue Moon meanwhile is a term used by astronomers to describe two full moons rising in the same month.

Topping everything off, the moon will perfectly align with the Earth and sun to completely disappear in the shadows.

Noah Petro, a research scientist from NASA’s Goddard Space Flight Center, said: “The lunar eclipse on January 31 will be visible during moonset.

“Folks in the Eastern United States, where the eclipse will be partial, will have to get up in the morning to see it.

“But it’s another great chance to watch the Moon.”

The next lunar eclipse will arrive on February 11. It will be a penumbral eclipse and most likely will go unnoticed to the average observer.

A Common ‘Forever Chemical’ Has Just Been Linked to Liver Cancer in Humans : ScienceAlert
This Seemingly Simple Foot Feature May’ve Allowed Sauropods to Become Giants : ScienceAlert
Deep-Sea Sponges Can ‘sneeze’ Out Mucus, and The Footage Is Weirdly Mesmerizing : ScienceAlert
Plants Have Been Keeping a Secret From Us About How Thirsty They Actually Are : ScienceAlert
Astronomers Charted The Sun’s Life, And This Is How The Story Ends : ScienceAlert