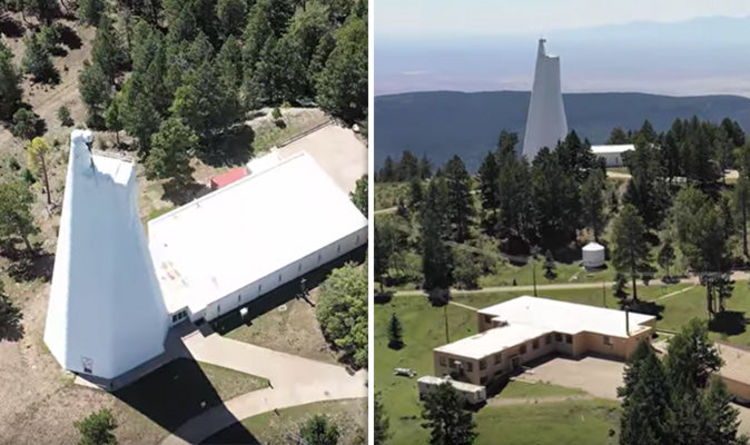 
Incredible drone footage has captured the first aerial look at the solar observatory at the centre of alien conspiracy theories.

The Sunspot Solar Observatory was shut down last Thursday, with FBI agents sweeping in to evacuate scientists and carry out an investigation into a “security issue”.

Local residents were also evacuated without an explanation and governmental officials have refused to elaborate on the reasons behind the sudden closure.

One evacuee Sean Williams said that FBI agents told him there a “credible threat” was behind the investigation at the observatory.

The silence from officials has sparked off a range of theories trying to explain the mystery, including a possible alien sighting or the sun gradually switching off.

They added that the observatory will be closed until further notice.

Drone footage of the area was captured on Wednesday this week by a local resident, who said he found “nobody in the area”.

The individual named Paul wrote that for the first time in his experience of the area, there was no phone signal within 16 miles of the observatory.

In the eerie video, the observatory which is taped off and closed to the public appears “completely deserted” and resembles a “ghost town”.

There are no visible signs of FBI presence, however users online speculate that they are working inside the observatory.

Mr House said that the FBI has kept local residents in the dark, adding: “The FBI is refusing to tell us what’s going on.

“What their purpose was nobody will say. But for the FBI to get involved that quick and be so secretive about it, there was a lot of stuff going on up there.

“There was a Blackhawk helicopter, a bunch of people around antennas and work crews on towers but nobody would tell us anything.”

Association of Universities for Research in Astronomy (AURA), which runs the observatory, confirmed that they had ordered the evacuation – but then added they are “not actually sure when the facility was vacated”.

The Sunspot Solar Observatory is near the US Holloman Air Force Base and White Sands Missile Range, also located in New Mexico.

These US Army facilities are among the most secretive military installations in America.

The observatory is also just a two-hour drive from the notorious town of Roswell, New Mexico, famous for its alleged UFO crash.

The team that operators the telescope at the observatory have confirmed there was no alien sighting.

James McAteer, director of the observatory, said: “The telescope did not see aliens. All data will be made public in its unaltered form. Nothing is hidden or kept secret.”

Mr McAteer added that the government officials “locked all the doors” as they were leaving but he doesn’t know why.

Everisto Gomez, a dispatch operator for the Otero County Sheriffs Office, added: “This is very abnormal.”