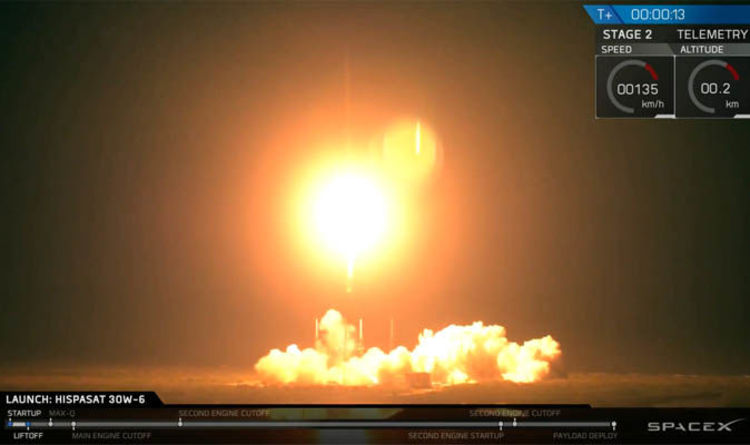 
The US-based rocket manufacturer reached a space flight milestone in the wee morning hours on Tuesday – the 50th ever Falcon 9 flight.

Since the first Falcon 1 demo flight in March 2006, the company has made leaps and bounds in the field of rocket engineering.

You can now re-live that 50th flight from the Kennedy Space Centre in Cape Canaveral, thanks to the SpaceX webcast stream below.

The imposing Falcon 9 rocket took off to the deafening roar of its Merlin engines just after 12.33am EDT (5.33am GMT) on Tuesday March 6.

“At 6 metric tons and almost the size of a city bus, it will be the largest geostationary satellite we’ve ever flown.”

The monstrous Hispasat 30W-6 satellite onboard the Falcon 9 is a brand new Spanish telecommunications satellite, designed to broadcast commercial video, data and broadband some 220,000 miles over the equator.

The Falcon 9 deployed the Hipsasat into space about 33 minutes after launch, placing the satellite into geostationary transit orbit.

To date, the Hipsasat is the third largest geostationary satellite flown by SpaceX.

“Built on the SSL 1300 satellite platform, Hispasat 30W-6 is expected to have a useful life of 15 years with 10.5 kW power and a multi-mission payload distributed across 40 Ku band transponders, 6 Ka band beams and 10 C band transponders”

The satellite will provide Spanish and Portuguese content to audiences worldwide, broadcasting over Europe, the Mediterranean and the Americas, as well as provide some signal coverage to Latin America.

After launch, SpaceX did not attempt to retrieve the Falcon 9 booster, due to unfavourable weather conditions off the Atlantic Coast of Florida.

The Hipsasat marked the fourth launch of the year so far, and the 50th in the Falcon 9’s illustrious space flight career.

Teasing plans for the future, SpaceX boldly announced it will carry out significantly more than 20 rocket launches this year.

A Lost Interview With The ‘Father of The Big Bang’ Was Just Discovered : ScienceAlert
Ancient Goo Spills The Secrets of How The Egyptians Mummified Their Dead : ScienceAlert
How a Dead Girl in Paris Wound Up With The Most-Kissed Lips in All of History : ScienceAlert
Wildfire Destruction in The Western US Has Doubled in Just 10 Years : ScienceAlert
AI System Detects Strange Signals of Unknown Origin in Radio Data : ScienceAlert