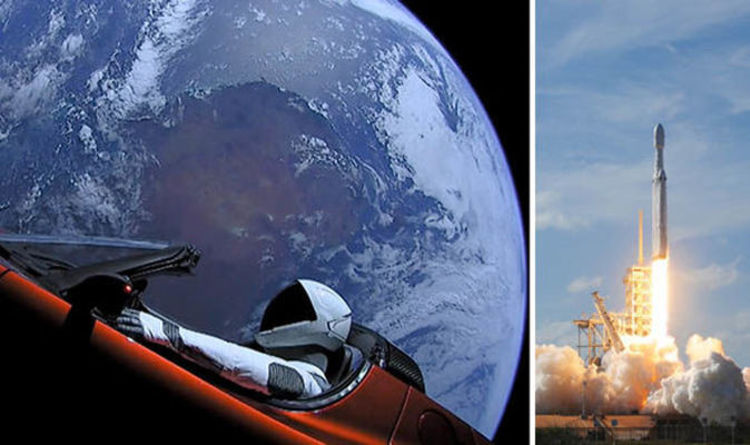 
The entrepreneur and SpaceX made history on February 6 after the successful launch of the Falcon Heavy – the most powerful and heaviest rocket ever built.

The rocket was carrying was a cherry-coloured Tesla Roadster with a dummy driver listening to David Bowie’s Space Oddity.

The car was meant to orbit the Sun in close proximity with Mars for the next billion years – providing space radiation did not tear it up.

However, a team led by Canadian astrophysicist Hanno Rein from the University of Toronto Scarborough has run some calculations and found that the car could one day come crashing back to Earth in a blaze of glory.

Due to the “chaotic orbit” of the car, it could one day fall in line with Earth’s orbit where we will collide.

Prof Rein said: “We have all the software ready, and when we saw the launch last week we thought, ‘Let’s see what happens’.

“So we ran the [Tesla’s] orbit forward for several million years.”

The first of the close encounters with Earth will be in 2091, but the researchers behind the study do not expect the Tesla to hit Earth in the next thousand years.

The calculations show that there is a six percent chance the car will hit Earth in the next one million years, but a 2.5 percent chance Venus could collide with it in that timeframe.

Looking over a longer period, three million years, the likelihood that the Tesla will crash into Earth rises to 11 percent.

However, the researchers state that the car would not pose any threat to humanity.

Prof Rein said: “It will either burn up [in the atmosphere] or maybe one component will reach the surface.

“There is no risk to health and safety whatsoever.”

This Species of Carnivorous Plant Evolved Into a Toilet And Is Now Winning at Life : ScienceAlert
This Rembrandt Has Been Hiding a Surprising Secret For Centuries : ScienceAlert
Bacteria Can Use Plastic Waste as a Food Source, Which Isn’t as Good as It Sounds : ScienceAlert
Dogs Can Be Aggressive For Lots of Reasons, And One of Them Is You : ScienceAlert
Major Blow as Experimental HIV Vaccine Fails in Late Clinical Trial : ScienceAlert