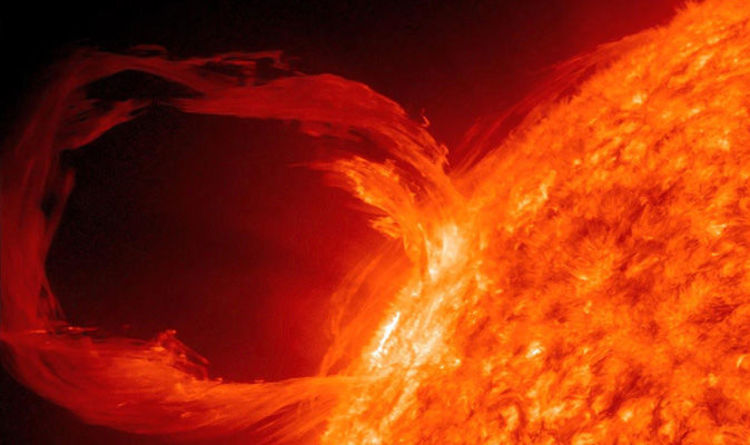 
Sunspots are holes in the Sun’s outer atmosphere which allow a stream of particles and solar flares to depart from the surface.

This can be a problem for Earth if the cosmic particles hit because they can cause our atmosphere to expands and essentially make satellite technology redundant.

Since yesterday, scientists have said the sunspot appeared and grew astonishingly quickly.

The website Space Weather states: “Yesterday, sunspot AR2715 did not exist. Today, it sprawls across more than 60,000 km of solar surface with a primary dark core twice as wide as Earth.

“The dimensions of the fast-growing sunspot group make it an easy target for backyard solar telescopes and a potential source of solar flares. Monitoring is encouraged.”

Solar flares unleash winds which can pummel the Earth.

For the most part, the Earth’s magnetic field protects humans from the barrage of radiation that comes with solar storms, but they can affect satellite-based technology.

Solar winds can heat the Earth’s outer atmosphere, causing it to expand.

However, solar storms can result in Southern or Northern Lights – or aurora australis and aurora borealis – depending on which hemisphere the solar winds hit.

A Strange Thing Happens to Wolves Infected by Infamous Mind-Altering Parasite : ScienceAlert
Earth’s Oxygen Came From an Unexpectedly Deep And Hot Source, Study Suggests : ScienceAlert
It Sounds Crazy, But Walking Backwards Is Really, Really Good For You : ScienceAlert
Crocodiles Seem to Be Thriving in a Toxic River That’s More Like a Sewer. Here’s Why : ScienceAlert
Mysterious Tendrils Inside The Brain May Control Our Perception of Time : ScienceAlert