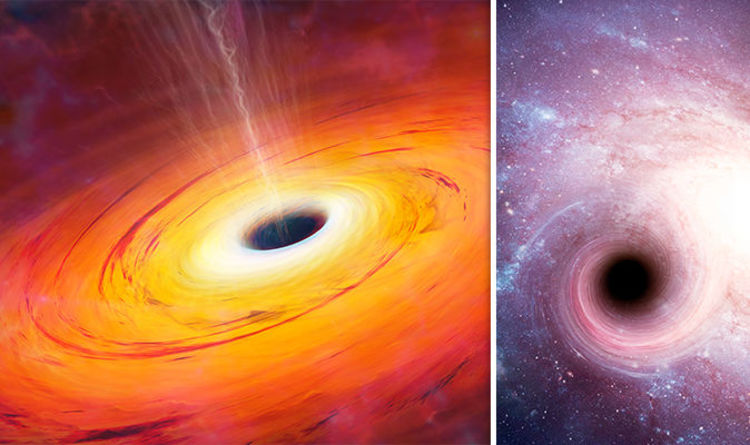 
The Hubble and Chandra space telescopes detected the burp 800million light-years away.

Julie Comerford, from the University of Colorado, said: “Black holes are voracious eaters, but it turns out they don’t have very good table manners.

“There are a lot of examples of black holes with single burps emanating out, but we discovered a galaxy with a supermassive black hole that has not one but two burps.”

The expert added that “black holes are voracious eaters, but it turns out they don’t have very good table manners” as she compared the space behemoths to “someone eating dinner”.

She went on: “This new burp is actually moving like a shockwave that is coming out very fast.

“I thought of an analogy for this and I was debating whether to use it or whether it’s a little too gross… imagine someone eating dinner at their kitchen table and they’re eating and burping, eating and burping.

“You walk in the room and you notice there’s an old burp still hanging in the air from the appetiser course.

“Meanwhile, they’re eating the main course and they let out a new burp that’s rocking the kitchen table.”

A space “burp” consists of high-energy particles being launched back into space from the depths of a black hole.

Supermassive black holes are the largest form of the space giant and are typically found in the centre of big galaxies.

An X-ray emission from the galaxy, dubbed SDSS J1354+1327, was discovered by the Chandra telescope.

The Hubble telescope then picked up clouds of blue-green gas emerging from the black hole from a previous burp.

The team of researchers, that published a journal entry on the results, declared they believe the black hole could have burped twice thanks to a collision between two galaxies.

Ms Comerford stated: “There’s a stream of stars and gas connecting these two galaxies. That collision led gas to stream towards the supermassive black hole and feed it two separate meals that led to these two separate burps.”

Ms Comerford explained: “Theory predicted that black holes should flicker on and off very quickly and this galaxy’s evidence of black holes does flicker on timescales of 100,000 years – which is long in human timescales, but in cosmological timescales is very fast.”