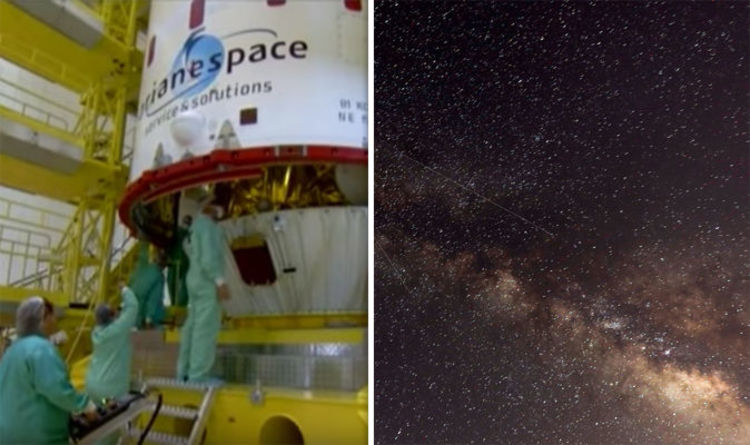 
The report was produced by a team of researchers, led by Dutch astronomer Amina Helmi, who used data the Gaia space telescope to reach their conclusions.

They found around ten billion years ago, five billion years before the Earth’s formation, the Milky Way crashed into a smaller galaxy dislodging some of its stars.

Some of these then became integrated into the Milky Way.

“It has eaten many dwarf galaxies in the past, and we’ve just found a major one that it ate in the past.”

The galaxy that researchers believe collided into ours has been named Gaia-Enceladus, after the Greek goddess and her offspring.

Scientists believe Gaia-Enceladus was a dwarf galaxy, with about a fifth of the mass of the Milky Way, which contained around 600 million stars.

The history of stars can be determined by their direction.

Ms Helmi told Space.com: “When you look at how stars move, they retain in their motions a memory of the place where they were born.”

Ms Helmi and her team identified 33,000 stars moving very differently to the rest of the Milky Way, and concluded they could have been stolen from rival galaxies such as Gaia-Enceladus.

Of these 33,000 they carried out advanced research of 600 using a ground based telescope, and concluded they came from outside our galaxy.

The impact of the collision with Gaia-Enceladus caused a portion of the Milky Way to expand, creating the ‘thick-disk’ section of our galaxy which is responsible for the murky line of light we can see in the night sky.

According to Ms Helmi the findings show the Milky Way had a “very turbulent youth”.

The Gaia space telescope is owned and managed by the European Space Agency, to which the UK is a significant contributor.

The research was published in scientific journal Nature.

A ‘Wormhole’ Built on a Quantum Computer Teleported Information as Predicted : ScienceAlert
We May Finally Know How Lightning Gets Its Zigzag Shape : ScienceAlert
Millions of ‘Silent Synapses’ Could Be The Key to Lifelong Learning : ScienceAlert
Psychologists Found a Weird Trick That Changes How Food Tastes : ScienceAlert
Astronomers See a Star’s Final Scream Into a Black Hole Halfway Across The Universe : ScienceAlert