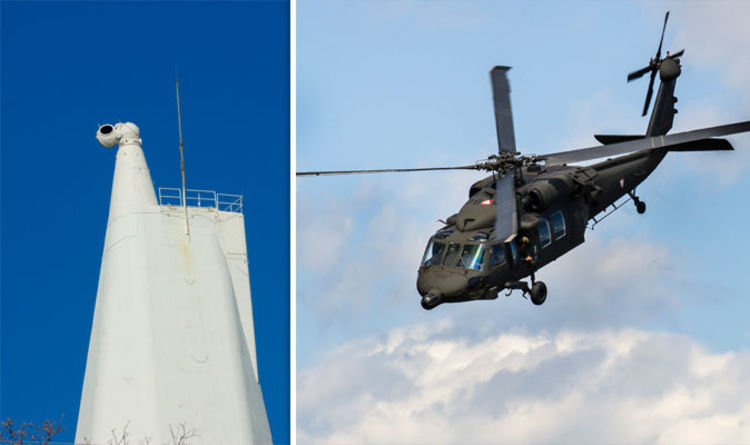 
The FBI swooped on the NSO last Thursday, closing it down to employees and the public without explaining what was happening.

The official line given was “security reasons” but local law enforcement in Sunspot, New Mexico, and workers at the the observatory have no idea what is going on.

Black Hawk helicopters are used by the US military for a vast array of reasons, including conducting air assaults, transporting troops and supplies, evacuating wounded soldiers and serving as a command and control centre.

They also employ stealth technology, which makes them harder to detect on enemy radar.

However, what they are doing over the NSO remains unknown with the FBI keeping tight-lipped over what is going on in the area.

With the closure shrouded in mystery, conspiracy theorists have been coming up with their own conclusions.

Some believe the solar observatory may have snapped a UFO while they were taking pictures of the sun.

Popular YouTube channel SecureTeam 10 said: “Whether that be some sort of machine or craft while they were taking images of the sun, I don’t know.

“Theories are abound that there could be some sort of alien craft or object, or a massive solar flare or none of the above; we just do not know.

“But there is definitely something off about this.

“Has this observatory captured something that they were not supposed to capture?”

Scientists Gave Young Mice The Blood of Old Mice. Then Things Got Weird : ScienceAlert
Minor Google Meltdown Exposes The World’s Utter Reliance on a Single Tech Company
Deep-Sea Sponges Can ‘sneeze’ Out Mucus, and The Footage Is Weirdly Mesmerizing : ScienceAlert
Researchers in South America Discover a New Species of Tiny but Tough Dinosaurs : ScienceAlert
Plants Have Been Keeping a Secret From Us About How Thirsty They Actually Are : ScienceAlert