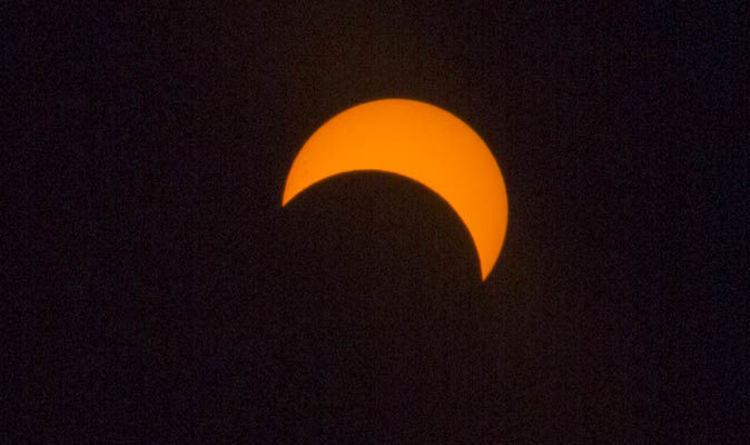 
The partial solar eclipse will be visible in Antarctica, and a sliver of southern South America.

Those living in Uruguay, Argentina, southern Chile, far western Paraguay, far southern Brazil and Antarctica will be able to see the celestial event for around two hours on Thursday, according to Ernie Wright, a programmer in the Scientific Visualisation Studio at NASA’ Goddard Space Flight Center.

It comes less than a month after the total lunar eclipse which coincided with a super moon on January 31.

A partial eclipse happens when the moon only blocks a portion of the sun.

It is different from a total solar eclipse, which happens when the moon completely blocks the sun.

NASA said: “A partial eclipse occurs when the moon passes in from of the sun, off centre and only a portion of the sun’s disk is obscured.”

Will the partial eclipse be visible over the US?

The partial eclipse on Thursday will only be visible for those living in the southernmost parts of below the equator, some countries in south America will be able to view the eclipse, but not in North America.

The best view of the partial solar eclipse will be for those living anywhere in the southern tip of South America, where nearly 40 percent of the sun will be covered up during the peak of the eclipse.

Along the eastern coast of Antarctica will experience the best view of 60 percent coverage at peak.

The eclipse will stretch out from the Pacific Ocean, west of Antarctica all the way over to Argentina and Uruguay.

The partial solar eclipse will begin at 6.55pm on February 15, when the silhouette of the moon starts moving across the sun.

It will reach its deepest point at 8.51pm and will end by 10.47pm and for observers in South America and Antarctica, the sun should be very low to the horizon by that time and close to setting in the local sky.

Skywatchers in North America will have to wait until April 8 2024 for the next major solar eclipse.

In 2018, there will be two more partial eclipses, one on July 13 which will be visible from southern Australia and another on August 11 which will be seen from northern Europe and northeast Asia.

Scientists Create Shapeshifting Humanoid Robot That Can Liquefy And Reform : ScienceAlert
An Expert Explains Why The Radioactive Water Stored at Fukushima Should Be Released : ScienceAlert
Major Blow as Experimental HIV Vaccine Fails in Late Clinical Trial : ScienceAlert
Sword Mistaken For Replica Is Actually An Ancient 3,000-Year-Old Weapon : ScienceAlert
There’s a ‘Lost City’ Deep in The Ocean, And It’s Unlike Anything We’ve Ever Seen : ScienceAlert