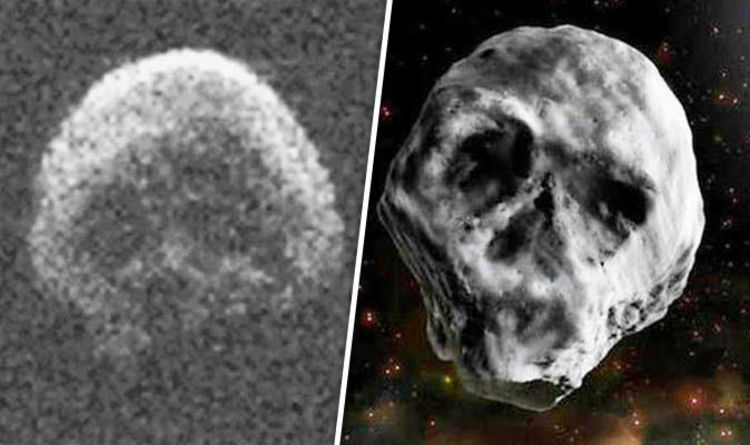 
The mysterious Asteroid TB145 arrived just in time for Halloween three years ago, flying by on the night of October 31, 2015.

Astronomers who spotted the flying space rock noted its incredible resemblance to a human skull.

The asteroid’s skull-like features earned it nicknames such as the Halloween Asteroid, the Skull Asteroid and the Death Comet.

The asteroid is now back on track to swing by Earth again but this time it looks like the asteroid will miss the famous night of trick-or-treating.

The asteroid will reach its closest proximity to Earth on the night of November 11 – two weeks after Halloween.

Unfortunately for enthusiasts asteroid hunters, the Skull Asteroid will be extremely hard to spot.

Paul Chodas, an asteroid expert from NASA’s Jet Propulsion Laboratory (JPL), said: “This time it’s not coming close enough to be any larger than a dot of light.”

When the death comet last paid a visit, the space rock missed the Earth by just 300,000 miles or just 62,000 miles farther than the Moon.

This time around, the asteroid will zip past at a safe distance of more than 25 million miles.

This is approximately 100-times the average amount of space between the Earth and the Moon.

According to Thomas Müller, a researcher at the Max-Planck Institute, the asteroid will not make a closer approach for observation for the next 70 years.

He said: “The next slightly more exciting encounter will be around Halloween’s day in the year 2088, when the object approaches the Earth to a distance of about 20 lunar distances.

NASA believes Asteroid TB145 is a dead comet, meaning its trips around the Sun have removed all traces of organic compounds like carbon dioxide, frozen water, ammonia and methane.

These elements typically create a comet’s characteristic glowing tale when speeding through space.

NASA said in 2015: “We found that the object reflects about six percent of the light it receives from the Sun.

“That is similar to fresh asphalt, and while here on Earth we think that is pretty dark, it is brighter than a typical comet which reflects only three to five percent of the light.

“That suggests it could be cometary in origin but as there is no coma evident, the conclusion is it is a dead comet.”

This Artificial Synapse Can Run a Million Times Faster Than Ones in The Human Brain : ScienceAlert
Record-Breaking Experiment Could Solve a Huge Challenge in Quantum Computing
New Predictions Reveal The Fate of The World’s Biggest Ice Sheet if We Don’t Act : ScienceAlert
Deep-Sea Sponges Can ‘sneeze’ Out Mucus, and The Footage Is Weirdly Mesmerizing : ScienceAlert
A Common ‘Forever Chemical’ Has Just Been Linked to Liver Cancer in Humans : ScienceAlert