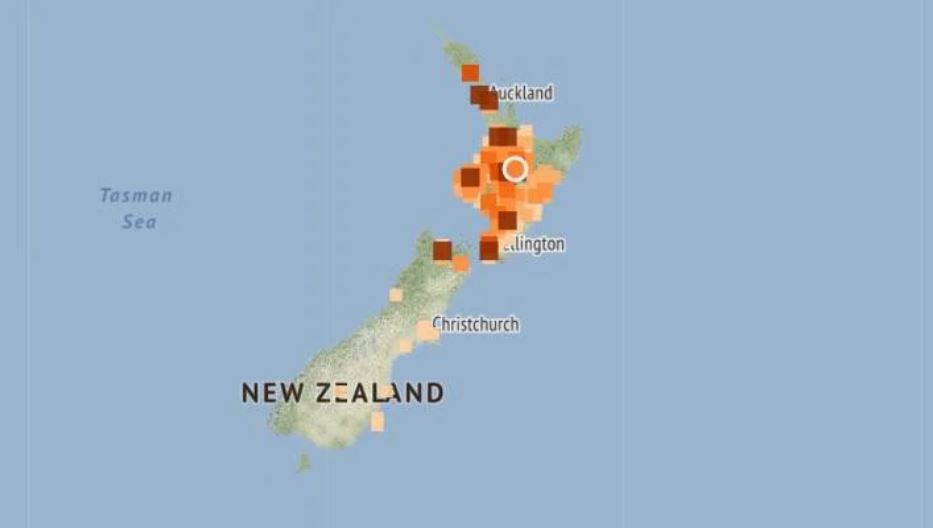 
The Taupo Volcano has produced two of the world’s most violent eruptions in geologically recent times.

And today, September 4, 2019, Lake Taupo, in the centre of New Zealand’s North Island, the caldery of the large supervolcano has been struck by two very shallow earthquakes. Is it waking up again?

According to GeoNet, a 5.2 magnitude earthquake hit at 7.02pm.

A second quake with a magnitude of 4.5 and a depth of 5km was also widely felt.

Both earthquakes were centred 15km northeast of Turangi, under the bed of Lake Taupo.

The quake was shallow, recorded as being only 3km deep, was felt as far south as Dunedin.

The Strongest in a Long Time

More than 4,000 people reported feeling the quakes on Geonet.

“I felt my whole house and furniture shake, quite scary,” a Taumarunui local said.

Two people in Rangatira Park, Taupo, described the quake as “quite a jolt.”

A Stuff reader in Kinloch saw “lights swinging, chimney rattling, walls creaking” due to the quakes.

One person said it had “quite a jolt and rattle for approximately 1-2 minutes” while she said it was “the strongest I have felt for a long time. It really shook the house this time.”

Others commented that it “gave us a real fright” and “had a bit of a roll to it”, while one person counted themselves lucky they had a big table to hide under;

“Lucky we got a table for eight so we can all fit under it if it gets worse,” they wrote.

“Felt [it] in Taupo, was dishing up dinner and the bench swayed towards me, definitely a good shake,” one person posted on Facebook.

“Had an item fall of our wall unit. Worst we’ve felt in a long while,” said another.

Other Taupo residents have described their houses shaking, calling it “the strongest in a long time.”

Geonet said the earthquakes were likely to be part of a swarm that started in July, and more aftershocks were possible.

The swarm started on July 10 and 160 quakes were recorded in the Taupo area in the following week. Eight of those events were between magnitude 3.1 and 3.8.

Quake swarms were common in the Taupo Volcanic Zone and several were recorded each year. Larger ones had lasted weeks-to-months and included many hundreds of earthquakes.

What About an Oncoming Eruption of Taupo Volcano?

Taupo began erupting about 300,000 years ago, but the main eruptions that still affect the surrounding landscape are the Oruanui eruption, about 26,500 years ago, which is responsible for the shape of the modern caldera, and the Hatepe eruption, dated 232 ± 5 CE. However, there have been many more eruptions, with major ones every thousand years or so.

Considering recent history alone, the volcano has been inactive for an unusually long period of time. Some volcanoes within the Taupo Volcanic Zone have erupted far more recently, however, notably a violent VEI-5 eruption of Mount Tarawera in 1886, and frequent activity of Whakaari/White Island, which erupted most recently in September 2017.

So do you think the Taupo Volcano is going to wake up again?

Scans of Mummified ‘Golden Boy’ Reveal He Was Covered in Magical Protections : ScienceAlert
Babies May Not Be Born With a Microbiome After All, Scientists Say : ScienceAlert
Lightning Strikes Create a Strange Form of Crystal Rarely Seen in Nature : ScienceAlert
Dogs Can Be Aggressive For Lots of Reasons, And One of Them Is You : ScienceAlert
‘Funky Worm’ Fossil Helps Explain The Mysterious Origins of Amphibians : ScienceAlert