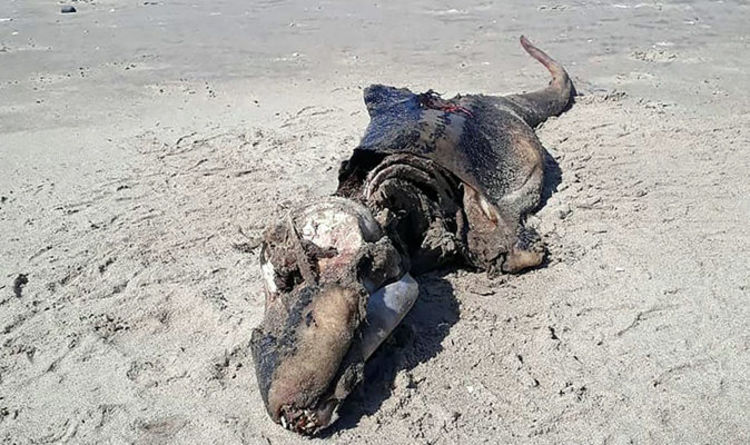 
A strange five-foot long carcass of a sea beast turned up on Rhossili Beach in Gower, Wales, leaving locals terrified.

The dead ‘monster’ has a long head with a huge jawline and a slim tail.

The alien-looking creature was discovered by 41-year old Beth Jannetta who was walking her dog along the beach when she noticed the strange carcass.

Ms Janetta took a picture of the mystery being and passed the images on to experts to see if they could unravel the mystery.

She said: “I was going for a run with my dogs when I came across it. It looked like a well rotted cetacean to me.

“Other people think it is something different, like a crocodile.

“It would be very interesting to find out what species it is.”

However, experts have been unable to decipher what the creature could be, but believe it is likely to be a type of whale, dolphin, or porpoise.

Bioscience expert Dr Dan Forman, of of Swansea University said: “When you look at it the first time you may think it is a crocodile, but it is certainly not.

“There is a big bulge on the base of the skull which is characteristic of a cetacean.”

“It’s jawline suggests it is like a cetacean whale or a dolphin.

“We get a reasonable amount of whales and dolphins, a lot which are dead and decomposed in places like Pendine and Rhossili.

“From the data around carcasses washed up, there seems to be a cluster this time of year around June and July.

“The jaw is thin in places and it looks from the picture like it is upside down.”

Mark Hipkin, National Trust area ranger, who was called to collect the body, said he thought it was a porpoise.

He said: “We have porpoises washing up quite regularly, as well as dolphins and seals and sometimes sheep.”

‘SuperGPS’ Technology Accurately Pinpoints Your Position Within Inches : ScienceAlert
The FDA Just Approved The Most Expensive Drug in The World : ScienceAlert
‘Baby Brain’ Is Real, Scientists Confirm, And We May Finally Know Why : ScienceAlert
Two Black Holes Met by Chance, And It Created Something Never Seen Before : ScienceAlert
Mysterious Changes Identified in The Brains of People Who Get Migraines : ScienceAlert