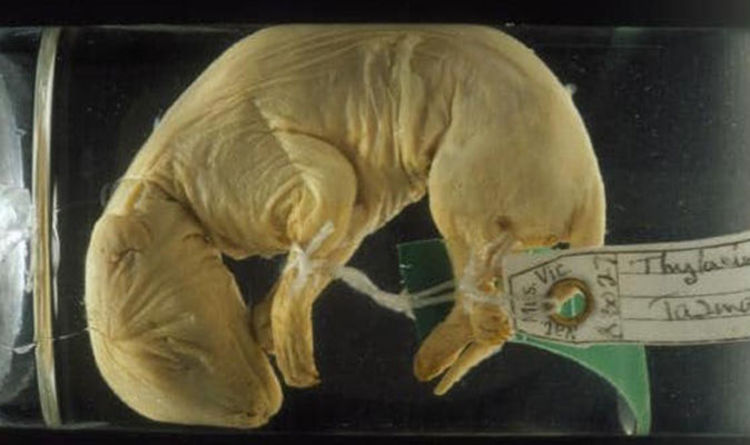 Despite its name, the creature, a marsupial which is also known as the thylacine, is not closely related to big cats.

It was hunted to the brink of extinction by the start of the 20th century and the last specimen, a male known as Benjamin, died in captivity in 1936.

Hopes the animal could be resurrected were raised after experts successfully sequenced its genome towards the end of last year using genetic material from the well-preserved specimen of a four-week old baby.

And now thanks to ongoing technological advances, they are already looking to the next phase, which could involve cloning the animal.

Andrew Pask, a biologist from the University of Melbourne, was part of a team who successfully sequenced the genome, said the discovery of the specimen had been invaluable in enabling he and his colleagues to piece together the thylacine’s ‘genetic blueprint’.

He said: “It gave us so much information about what was unique about the thylacine.

A pioneering cloning technique developed by Harvard geneticist George Church is being hailed as a way of bringing extinct creatures back to life.

Professor Church’s team is working on bringing back the mammoth back by using DNA of an Asian elephant (its closest living relative).

“They will be able to bring something mammoth-like back to life.”

The closest living relative to the thylacine is another marsupial known as a numbat, but there are many differences in the two species.

Mr Pask said: “You would have to make a lot more changes to make the numbat DNA look like a thylacine but the technology for making those changes has gotten exponentially easier in the last five or so years because of the people who are doing the mammoth work.”

Despite the fact that the last living specimen died in 1936, it was only declared extinct in 1986 as a result of various reputed sightings in the interim.

The cloning idea remains controversial, with plenty of opposition from others uncomfortable with the prospect.

Australian wildlife biologist Nick Mooney told Express.co.uk in December: “I call the proposed cloning clowning. It’s again all about how clever we are. The original effort was about developing bio-tech and used thylacines as a charismatic fundraiser.

“That’s the ethic I worry about, not the reconstruction per se. Unlike woolly mammoths, we did after all kill it off.

“The technology is legitimate and there are very rare animals with ideal surrogates that could be far more easily bolstered by cloning.”