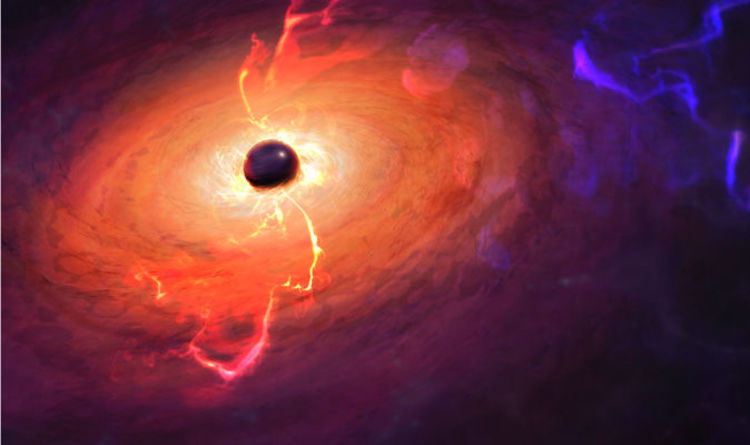 
What existed before the Big Bang has long been a subject of scientists and the layman but a group of theoretical physicists believe they may have the answer.

They believe remnants of black holes which existed in a universe before ours came to fruition can be picked up in the electromagnetic radiation which is ever present throughout the universe.

This radiation – more commonly known as the cosmic microwave background (CMB), the leftover radiation from the Big Bang – contains energy from ‘phantom’ black holes that existed before our universe.

Black holes are arguably one of the most intense and powerful things in the universe.

Their immense gravitational pull means nothing – not even light – can escape from its grasp and they have the ability to completely distort space and time.

Something as powerful as this is bound to leave a lasting impression, and researchers believe their legacy could even continue through to another universe.

However, black holes also go through a process known as ‘Hawking radiation’ – which was first theorised by the late Stephen Hawking.

His theory said particles could rob black holes of their energy making them disappear at a minuscule rate as they release everything they had once swallowed in a trickle of dust.

And it is this what researchers have been looking for.

The idea comes from Roger Penrose, a physicist from the University of Oxford who was a colleague of Stephen Hawking, mathematician Daniel An from State University of New York Maritime College and University of Warsaw theoretical physicist Krzysztof Meissner.

“But the… entire Hawking radiation of the hole throughout its history.

“The thing about this period of time is that massless gravitons and photons don’t really experience time or space.”

“If the universe goes on and on and the black holes gobble up everything, at a certain point, we’re only going to have black holes.

“Then what’s going to happen is that these black holes will gradually, gradually shrink.”

Scientists Say ‘space Bubbles’ Could Shield Earth From The Sun, But Would It Work? : ScienceAlert
For The First Time, Scientists Have Named a Heat Wave. Here’s Why It’s a Big Deal : ScienceAlert
Many Cat Lovers Are Giving Their Cats Unwanted Affection, Study Suggests : ScienceAlert
The Moon Stole Something From Deep Inside Earth Eons Ago, and Scientists Can Prove It : ScienceAlert
Researchers in South America Discover a New Species of Tiny but Tough Dinosaurs : ScienceAlert