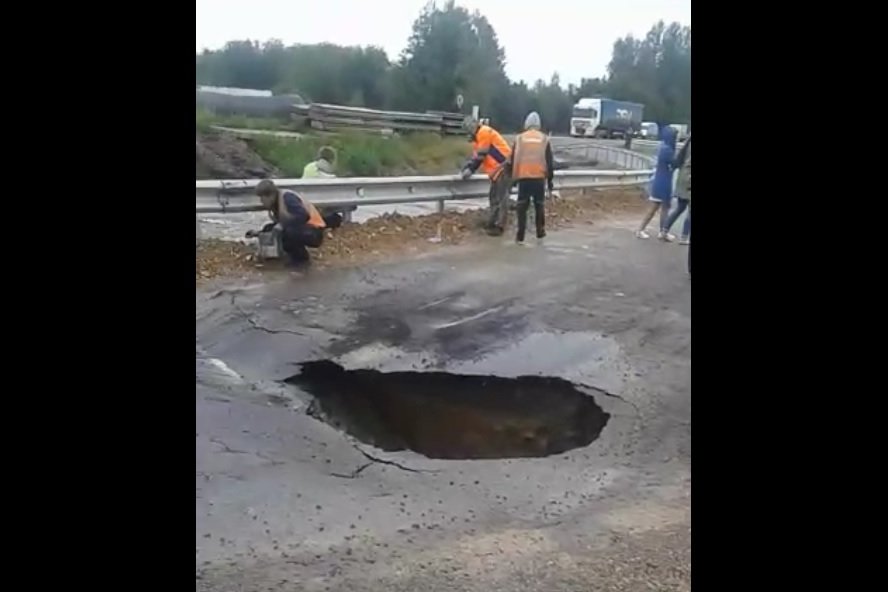 
Take a river overflowing, add a funnel sucking up the water underground below the highway and a sinkhole in the middle of the road.

And you are sure it is soon going to collapse entirely!

Travelers driving on the Chita-Khabarovsk highway near the village of Volochaevka captured an omnious sightning of a funnel sucking up water from an almost overflowing river under the unstable road.

Already, a huge sinkhole is growing in the middle of the road.

And looking at the video, it seems that this part of the highway has sunk into the ground, most probably announcing the total collapse of the road.

Officials are trying to investigate the cause and the gravity of the incident.

Russian news networks are announcing that parts of the federal highway Chita – Khabarovsk was washed out by rains, creating a mega traffic chaos in the region.

Meanwhile, a state of emergency has been declared in Russia’s Far Eastern Primorye Region due to floods.

Here an insane video compilation, showing devastation and even a guy showering in the rain under his home. Crazy Russians :-)!

Over the last two days, the remote region has been hit by incessant torrential rains, which flooded several streets and triggered a mudslide in the regional capital of Vladivostok. According to the Primorsky Hydrometeorological Center, the amount of rain that fell over the last two days was three times higher than the monthly average.

Floods, floods and again floods all over the world… even in Russia!

Mysterious ‘Zone of Uncertainty’ Inside The Brain Reveals a Surprise : ScienceAlert
JWST Has Found Life’s Elemental Building Blocks in The Depths of Darkest Space : ScienceAlert
Scientists Reveal The Most Distant Galaxy We’ve Ever Found : ScienceAlert
Major Blow as Experimental HIV Vaccine Fails in Late Clinical Trial : ScienceAlert
Babies May Not Be Born With a Microbiome After All, Scientists Say : ScienceAlert