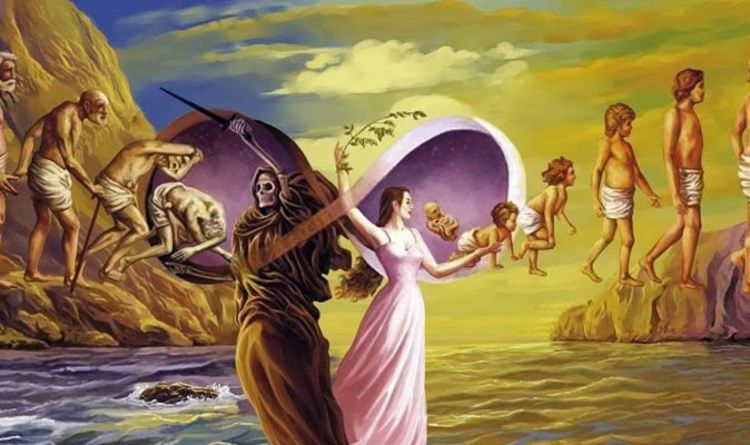 
Natural life is cyclical. Day fades into night and turns back into day as the sun rises. One season gradually gives way to the next. Over the passage of time, new generations are born and old ones die. The continuous succession of birth, death and rebirth permeates nature even though our own lives seem linear.

Reincarnation, also called transmigration or metempsychosis, is the concept that the soul, or some aspect of the soul, is reborn into new lives.

Depending on the religion or philosophy, the soul can appear incarnate in humans, animals or plants as it works its way toward an eventual escape from the cycle of birth, death and rebirth.

Most religions that believe in reincarnation consid­er it the path to purity and salvation.

A conspiracy theory claiming the Bible was stripped of all reference to evidence of reification is made in a Youtube clip by All-time Conspiracies.

The narrator said: “Early Christian theologian Origen of Alexandria believed in reincarnation. The Greek scholar wrote over 800 precise’s on every aspect of Christianity.”

He is held up alongside the early saints as one of the church fathers. One of the most important theologians of all time.

Yet, he was “denounced by the church as a heretic because of his teachings, which included arguments in favour of reincarnation,” the narrator said.

He continued: “We only know Origen was a heretic because it was noted in the records of the Second Council of Constantinople in A.D. 553.

“This is when his heretical writings were destroyed, so we can never know exactly what he said that was so heretical.”

Origen was a theologian, philosopher, and devoted Christian of the Alexandrian school. He famously castrated himself so he could tutor women without suspicion.

And he risked his life countless times in encouraging martyrs. He himself was tortured under Decius as an old man and died a short time later.

Origen’s controversial views on the pre-existence of souls, the ultimate salvation of all beings and other topics eventually caused him to be labeled a heretic, yet his teachings were highly influential and today he is regarded as one of the most important early church fathers.

The Youtube clip, released in early 2018 claims, “New Age believers say the “Church also retranslated the Bible to expunge all evidence for reincarnation.”

A Tobacco Plant Has Been Engineered to Produce Cocaine in Its Leaves : ScienceAlert
Engineers Propose an Ambitious Plan to Bury Excess Carbon at The Bottom of The Ocean : ScienceAlert
Millions of ‘Silent Synapses’ Could Be The Key to Lifelong Learning : ScienceAlert
We May Finally Know How Lightning Gets Its Zigzag Shape : ScienceAlert
Crocodiles Seem to Be Thriving in a Toxic River That’s More Like a Sewer. Here’s Why : ScienceAlert