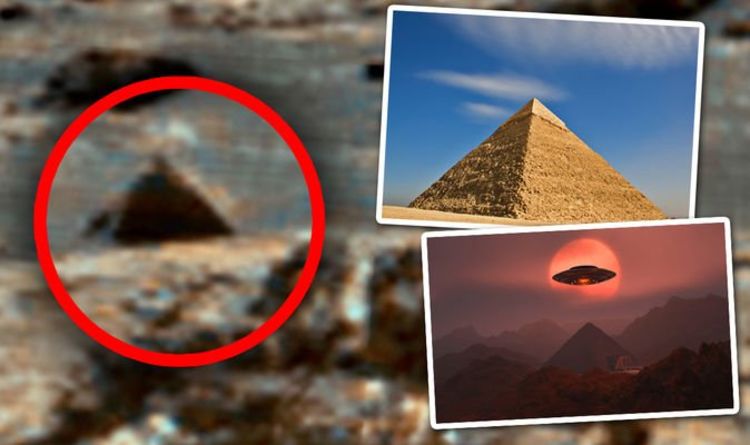 
NASA’s tireless hunt for signs of alien life outside of Earth is primarily focused on the dusty surface of Earth’s closest neighbour, Mars. Every single day the US space agency receives a treasure trove of Mars photos from its famous Mars Curiosity rover. The NASA photos are then meticulously picked apart by scientists and conspiracy theorists alike in the hopes of finding extraterrestrial proof. UFO-hunter Scott C Waring, who runs the blog UFO Sightings Daily, is one of the many conspiracists who believe Mars once housed an ancient alien civilisation.

Mr Waring is convinced Mars’ surface is littered with evidence of alien structures, remains and technologies.

And in one of his latest UFO “discoveries”, the conspiracist said he came across an alien pyramid buried among a myriad of other buildings and statues.

The UFO-hunter said: “When you find one alien artefact on Mars, it’s thought-provoking, but when you find dozens of artefacts in the same photo it becomes indisputable evidence. Well, that happened today.

“At first, I had only found one interesting object in this photo – a white object which could easily be a living species of Mars.

“I believe the white object is actually a freshly made statue, which means a space population of this alien species live here.

“Then I let my eyes adjust to the photo and slowly I saw the doorway to the right of the white object.

“And yet a few seconds later I noticed the second doorway to the left of the white creature.

The NASA photo in question, Mr Waring argued, is evidence of an ancient city on Mars.

The conspiracist bizarrely claimed the “alien artefacts” prove extraterrestrials once lived on Mars but have since been scattered and buried in the red soils.

Mr Waring said: “This one photo of Mars is enough to change the beliefs of most non-believers instantly and yet, most of the world will never get to see it.

“So I ask you, please share this post. Repost it on any social site or news site you can find.

“We need to let the public know the truth that intelligent life once existed on Mars.”

So does the NASA photo of Mars truly reveal the existence of extraterrestrial pyramids and other structures? Probably not.

The most likely scenario is Mr Waring fell for the psychological effect known as pareidolia.

NASA explained: “Pareidolia is the psychological phenomenon where people see recognizable shapes in clouds, rock formations, or otherwise unrelated objects or data. There are many examples of this phenomenon on Earth and in space.”

Haunting Photos Show How Last Year’s Lunar Eclipse Looked From The Moon
This Absolute Monster of a Black Hole Eats The Equivalent of a Sun a Day
Artificial Intelligence Can’t Deal With Chaos, But Teaching It Physics Could Help
Insects’ Dazzling Colours Have Been Preserved in Myanmar Amber For 99 Million Years
Scientists Have Demonstrated Quantum Entanglement on a Tiny Satellite Orbiting Earth