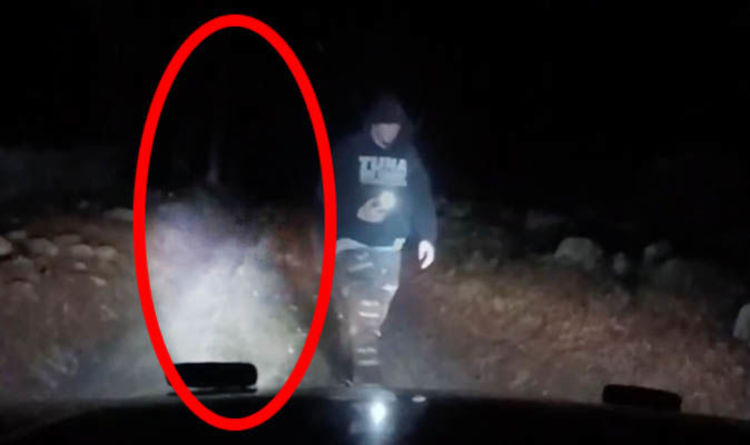 The bizarre ghost video titled ‘I think I filmed a ghost…’, was uploaded to YouTube by the channel The Slum Chemist, after the alleged encounter.

In the video the uploader recollects how his friends and him drove to a mysterious cemetery in the dead of night only to find more than they expected.

The video description reads: “My friends and I took a trip to an unmarked cemetery in the woods and what we caught on camera you guys won’t believe…”

The Slum Chemist is convinced he filmed a spirit from the afterlife.

The uploader explains: “That’s insane, I’ve never had a paranormal experience before.”

In the video, The Slum Chemist and his friends are seen driving deep into a blood curdling forest with nothing to guide them on their path but the lights from their car.

They delve into the woods to uncover a series of decrepit tombstones dating as far back as 1907.

At one point a voice in the vide shouts out: “That one seems to be glowing. This one’s like glowing.”

Proof of afterlife: A YouTuber claims to have filmed a real spirit in an abandoned cemetery 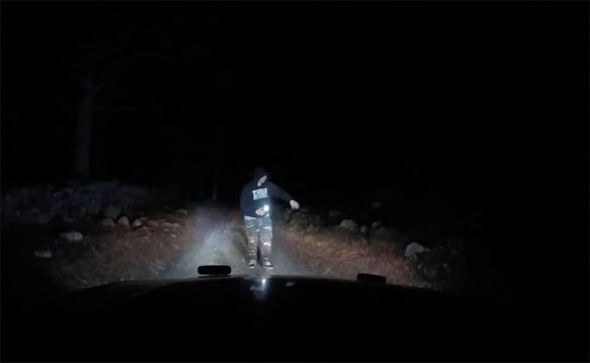 But the real shocker comes towards the end of the video, when one of the men tosses what appears to be a beer can into the forest’s undergrowth.

Instantly a dark shadow appears out of thin air briefly passes in front of him, just catching the headlight so their car – as if enraged by the act of littering.

Viewers shocked by the ‘dark spirit’ suggested it may have been a big bug passing in front of the car’s headlamps.

But the video uploader was not entirely convinced by the explanation, hinting that disposing of the rubbish in the forest may have angered a restless spirit.

A creepy figure is spotted whilst a couple are dancing

One person, A Flockofseacows, said in a comment: “I think your buddy should have taken a hint and taken the rubbish with him instead of throwing it away.

“Anyway, it’s pretty neat. First thought it is a bug passing in front of the headlights, but it seems to be obscuring quite a lot of light, doesn’t it?”

To which The Slum Chemist replied: “Yeah, we went back the next day and picked up the trash, they were pretty intoxicated so they didn’t really realise what they did.

“I am not sure what to think of the shadow…I don’t know how something would cast a shadow like that in front of really bright head lights and us not see it at the time.”

According to the video uploader’s explanation from the start of the video, the group of men went out in search of some creepy thrills after a night out of drinking.


He says in the video: “Seeing as this is a completely random video I am going to give you a rundown of what happened leading up this this clip for a bit of context.

“OK so I was driving around with my friends in the back seat, who where completely drunk and I was completely sober of course – do not drink and drive – but we were trying to see what’s the scariest place we can get out of the car while being intoxicated.

“So we drove to the middle of nowhere, to this cemetery that we stumbled upon while in the middle of the woods. They got out and walked around the cemetery for a bit”. 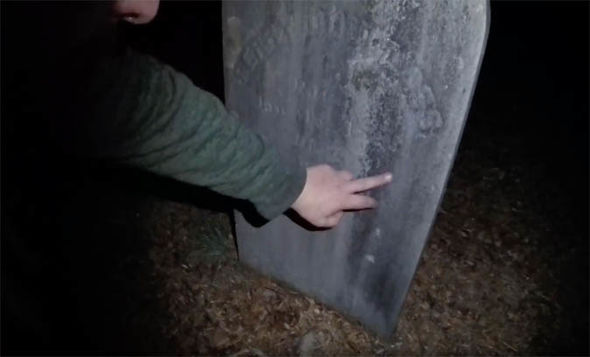 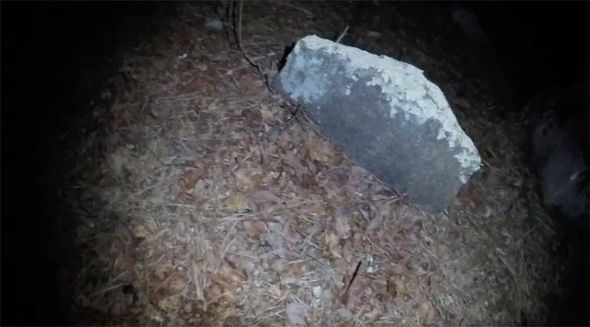 The group of men then proceeded to stumble around the dark for a while with the help of their phone’s flashlights, uncovering whatever dark and ancient secrets were hidden in the woods.

At one point they find a tombstone completely swallowed by the forest floor around it, to which one of the men bids it “rests in peace”.

But as fantastical as the alleged ghost footage may appear to paranormal enthusiasts, no concrete evidence has ever materialised to suggest ghost are in fact real.

While so-called ghost hunters around the globe like to think parts of us stay behind on Earth after death, scientists have long dismissed these claims.

According to Professor Brian Cox, famed TV astrophysicist and space boffin, the startlimng experiments carried out at the Large Hadron Collider in Switzerland have ruled out the existence of ghosts on the smallest scale imaginable.

Professor Cox explained on his The Infinite Monkey Cage podcast: “If we want some sort of pattern that carries information about our living cells to persist then we must specify precisely what medium carries that pattern and how it interacts with the matter particles out of which our bodies are made.

“We must, in other words, invent an extension to the Standard Model of Particle Physics that has escaped detection at the Large Hadron Collider.

“That’s almost inconceivable at the energy scales typical of the particle interactions in our bodies.”

There’s a ‘Lost City’ Deep in The Ocean, And It’s Unlike Anything We’ve Ever Seen : ScienceAlert
Hypertension Drug Shown to Extend Lifespan And Slow Aging in Animals : ScienceAlert
Newly Discovered Fossil Reveals Hundreds of Teeth ‘Never Seen Before in a Pterosaur’ : ScienceAlert
Our Body Temps Have Been Dropping For 160 Years. Gut Microbes May Be Playing a Role : ScienceAlert
One Simple Idea Makes It Much Easier to Manage Your Weight Over Time : ScienceAlert