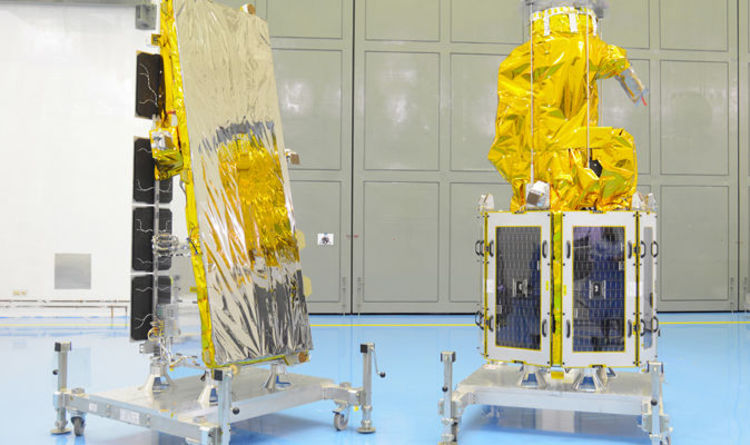 
NovaSAR-1 is designed and built by Surrey Satellite Technology Ltd (SSTL) in Guildford, with the UK Space Agency having invested £21million in the project.

In return it will benefit from access to data from the spacecraft, consequently boosting the UK’s Earth observation capabilities and encouraging additional investment by creating highly skilled jobs in the UK space industry.

The UK regularly punches above its weight when it comes to satellites, building 25 percent of the world’s telecommunications satellites.

The Government is investing £92 million into a feasibility study which will look at the possibility of developing a rival to the EU’s Galileo satellite system after Britain quits the EU next year, in response to Brussels threats to exclude the UK from its Galileo global positioning system.

NovSAR-1 will offer low cost remote imaging to global customers, including the Commonwealth Scientific and Industrial Research Organisation (CSIRO) in Australia and the Indian Space Research Organisation (ISRO), in a further indication of the UK’s lofty ambitions when it comes to the space sector as it looks to life after Brexit.

Dr Graham Turnock, chief executive of the UK Space Agency, said: “This exciting new satellite, with its powerful imaging radar system and compact design, has been developed and built in the UK, and will provide a host of benefits for applications including the detection of oil spills, flood monitoring and agriculture.

“The Government wants the UK to thrive in the commercial space age as part of the modern Industrial Strategy.

“This mission demonstrates SSTL’s world leading skills and the exciting potential for further growth in our sector.”

Minister of State for the Department for International Trade, Baroness Fairhead, said: “SSTL is a fantastic example of how UK innovation and engineering can have a global impact.

“It is clear that our space industry is thriving, resulting in significant growth which reinforces the UK’s reputation as a leader in the sector.

“Overseas sales are vital to sustaining this growth, and our recently launched Export Strategy outlines the support available to companies to help them fulfil their exporting potential.

“I would encourage companies that are looking to follow in SSTL’s footsteps to make use of financial support from UK Export Finance and the extensive export opportunities that are listed on GREAT.gov.uk.”

The UK is a world leader in Earth Observation technologies, including via the UK Space Agency’s International Partnership Programme (IPP).

The IPP initiative harnesses the expertise of the British space sector to tackle problems all around the world, from predicting outbreaks of deadly dengue fever in Vietnam to improving healthcare in Nigeria using satellite connectivity.

Since 1981, SSTL has built and launched more than 50 satellites for 20 international customers including in Europe, USA and Canada – as well as providing training and development programmes, consultancy services, and mission studies for ESA, NASA, international governments and commercial customers.

In India, the Department for International Trade (DIT) is aiming to increase its operation by recruiting British space sector experts to work there.

The satellite is set to launch from the Satish Dhawan Space Centre in Sriharikota, India at precisely 17:37 (BST).

NovaSAR-1 was designed and manufactured by SSTL, with an S-Band SAR payload developed by Airbus Defence and Space in Portsmouth and an Automatic Identification Receiver supplied by Honeywell Aerospace.

Extreme Drought in Italy Reveals Hidden Bomb Submerged in River Since WWII
Astronomers Charted The Sun’s Life, And This Is How The Story Ends : ScienceAlert
New Predictions Reveal The Fate of The World’s Biggest Ice Sheet if We Don’t Act : ScienceAlert
Record-Breaking Experiment Could Solve a Huge Challenge in Quantum Computing
Deep-Sea Sponges Can ‘sneeze’ Out Mucus, and The Footage Is Weirdly Mesmerizing : ScienceAlert