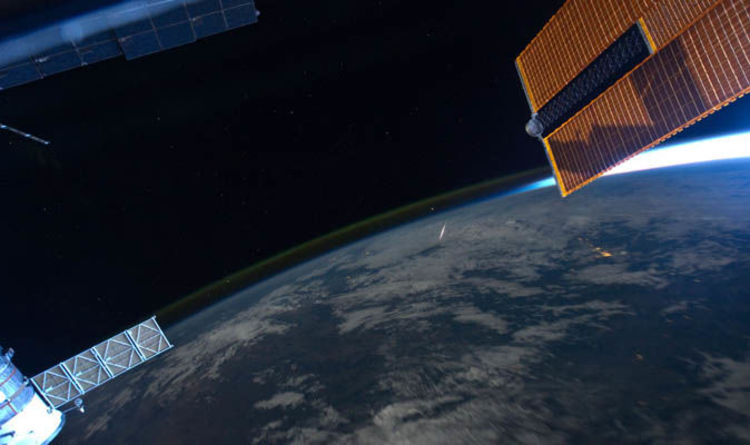 During the shower’s peak astronomers witnessed as many as 50 to 60 meteors brilliantly streaking across the night.

Many of the colourful fireballs were captured on camera and shared by USA space agency NASA.

The first photo shared by NASA was taken by photographer Qiushi Tian a few days before the peak.

Titled Fireball over Mongolia, the photo shows a green-tinged trail of ionised gas around a lonely Perseid lighting up the night over Ergun in the autonomous region of Inner Mongolia.

Another picture captured on the night of the shower was snapped by photographer John Colosimo over a period of 2.5 hours.

Beneath the shooting stars in the far background of the photo you can also make out NASA’s Parker Solar Probe which blasted off on a seven-year trip to the Sun this weekend.

Astrophotographer Derek Demeter snapped another incredible picture of the Perseids August from a different spot in Florida.

The breathtaking photograph is composite of 10 20-second-long exposures taken during the Parker Solar Probe’s liftoff from the Kennedy Space Center.

You can see two distinct Perseid streaks dashing across the starlit sky right next to the bright rocket trail of the Parker probe.

NASA has asked for more photographers to submit their photos taken on the nigh of the meteor shower.

The space agency said: “The best of images submitted to Astronomy Picture of the Day will continue to be added as they are received over the next few days.”

NASA’s Astronomy Picture of the Day (APOD) website shares a different image or photograph of the fascinating phenomena occurring in the universe every single day.

On August 12, APOD shared a picture of a green meteor streak dashing in front of the distant Andromeda Galaxy.

The photo was taken near the Perseid shower peak back in 2016 by photographer Fritz Helmut Hemmerich.

The meteor photo shows a sand-sized space rock flaring up and disintegrating as it slams into the Earth’s atmosphere.

The stunning green colour surrounding the meteor is glowing ionised gas as the meteor vaporised.

However, NASA said the unusual orientation of the meteor suggests it might have actually been a Delta Aquarid space rock despite showing up near the Perseid peak.

A picture of the Perseids was also snapped by cameras onboard the International Space Station (ISS) as it orbits the Earth 15 times a day.

The incredibly detailed photograph shows a lonesome Perseid burning up in the Earth’s atmosphere.

The Perseid meteors are the cosmic debris broken off from Comet Swift-Tuttle as it orbits the Sun every 133 years.

Every year between mid-July and the end of August the Earth approaches the comet’s orbit and its rubble slams int the planet’s atmosphere.

The Perseids have earned their name from their apparent radiant point near the constellation Perseus.

A Stunning New 3D Model of The Cat’s Eye Nebula May Help Us Solve Its Mysteries : ScienceAlert
Experiment Reveals What 1 Hour in Nature Does to The Human Brain : ScienceAlert
There Are New FDA Safety Warnings About Breast Implants. Here’s What We Know : ScienceAlert
Wolves Really Can Become Attached to Humans Like Dogs Can, Adorable Study Finds : ScienceAlert
The Orbit of a Sun-Like Star Reveals The Nearest Black Hole Ever Found : ScienceAlert