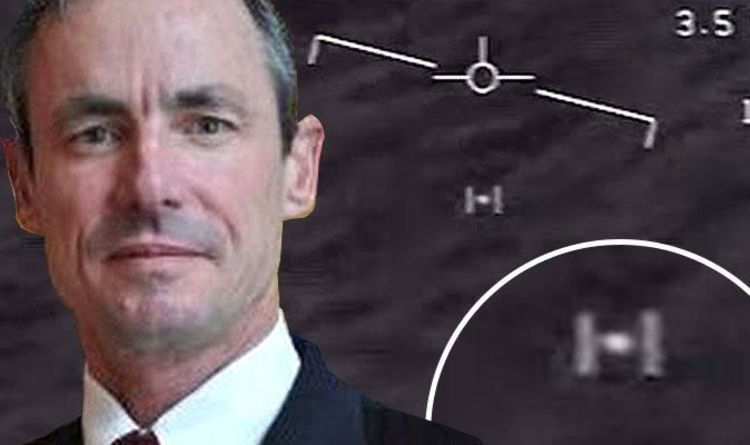 However, debunkers have now come forward to suggest it could be nothing more than a bird flying over the sea.

The new video evidence, which appears to show a US military pilot intercepting a mysterious unidentified flying object has shocked members of the To The Stars Academy, that one former senior official suggested it points to the existence of “an alien civilisation”.

The eerie declassified video reveals the moment the US pilots spot the mysterious oval object, which does not have any visible flight technology.

In the video the pilots themselves are astonished and stunned by the sight, with one pilot even saying “What the f*** is that?”.

Pilots of the American warplane record the flying object, which moves faster than any known US Air Force aircraft along the US East Coast at an altitude of 7,500 meters.

The footage, from a 2015 encounter, fails to identify the object which is oval-shaped and has “no obvious wings or tails”.


My first thought here is that it’s a bird. The perceived motion of the object against the ocean surface, even if it were moving very slowly, would be the same as the speed of the jet itself.


According to the conversation in the video, the Weapon Systems Operator (WSO) only managed to capture the object on the third attempt.

The recorded exchange between the two pilots reveals a stunned reaction to the object, with one of them saying: “Oh my gosh, dude. What the f*** is that thing?”

The other pilot adds: “Look at that thing fly! What is that man?”

To the Stars Academy of Arts and Science, which was set up by former Blink 182 singer Tom DeLongue and former military insiders last October has released the video.

It is the third to be released by the academy, which revealed the existence of a top-secret US Pentagon UFO investigation unit which ran from 2007 to 2012.

The Advance Aviation Threat Identification Programme (AATIP) was run by Luis Elizondo who resigned from the US Department of Defense (DoD) last October to join the academy.

Christopher Mellon, a former defence official in the George W Bush and Clinton administrations said the videos, along with observations by pilots and radar operators, “appear to provide evidence of the existence of aircraft far superior to anything possessed by the United States or its allies”.

He said the the US had either been “technologically leapfrogged by Russia or China”, or these videos “are evidence of some alien civilisation”.

The website has now looked at the latest footage which has been nicknamed by the academy as “Go Fast.”

He posted his theory on a website forum about the footage.

He said: “My first thought here is that it’s a bird.

“The perceived motion of the object against the ocean surface, even if it were moving very slowly, would be the same as the speed of the jet itself.

“This is hugely magnified by the high zoom.”

He then provided a video example of a static object that looked like it was moving through some trees.

He added: “The strangeness of the footage is largely a function of the ability of the ATFLIR camera to lock on to a white spot and track it.

“This accents the visual illusion that the object is moving because the parallax effect.

“The bird (or other slow moving object, but I suspect a large soaring sea bird) hypothesis tallies with the angle.

“The white dot, whatever it is, would be invisible to the naked eye.”

Metabunk member Brian Vincent said: “I thought that a balloon would be more likely than a bird because 12,000 ft seemed rather high for birds to be flying.

“I was rather surprised to learn that 12,000 ft isn’t very high and well within the range of many migratory birds and birds of prey.”

Another member with the user name Igoddard added: “It looks to me unremarkably like the cool feathers of a bird flying close over the sea.

“I also think we can make out a wing-flapping pattern (it sort of ‘leaps’ forward in steps, a differential rhythmic propulsion indicative of wing-flap-induced propulsion) that reminds me of the flying-insect UFOs called ‘rods.'”

The academy has also said that the AATIP paid for “materials recovered from UFOs that were unknown to science” to be stored away, but despite repeated requests no reports on the tests or evidence of the materials has surfaced.